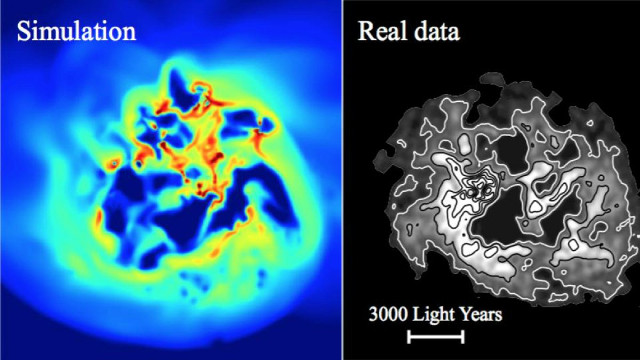 An article published in the journal “Monthly Notices of the Royal Astronomical Society” reports confirmations to the hypothesis of the effect known as dark matter heating. A team of researchers looked for the effects of the presence of dark matter in dwarf galaxies relatively close to the Milky Way, finding the confirmation that star formation can heat it causing it to move outwards. It’s a new possibility to study dark matter to try to understand its nature.

According to current observations, dark matter exists in the universe in a much greater amount than ordinary matter but doesn’t have the same type of interactions with electromagnetic waves. The consequence is that the presence of these enormous masses is deduced only by its gravitational effects with all the consequent problems in its study. An examination of 16 dwarf galaxies and in particular their star formation and the effects it may have on dark matter could offer new clues about it.

Astrophysics from the University of Surrey, Carnegie Mellon University and ETH Zürich measured the amount of dark matter present in the core of 16 dwarf galaxies that have very different stellar formation histories. The aim was to verify the effect called dark matter heating, which according to the theory happens when stellar winds generated by star formation push gas and dust away from a galaxy core reducing its mass and therefore its gravity that also acts on dark matter, which as a consequence moves away from the galaxy core.

The researchers found that galaxies in which star formation had long since ended have a higher density of dark matter in their cores than those in which star formation is still active. This confirms the theory that dark matter heating is lower in older galaxies. Justin Read, Head of the Department of Physics at the University of Surrey and lead author of this research, stated that his team found a remarkable relationship between the amount of dark matter at the center of the dwarf galaxies they examined and the amount of stars that formed in the course of their life.

Simulations of dark matter heating in dwarf galaxies offered dynamic reconstructions of that phenomenon. The image (courtesy J. Read et al.) shows on the left side the density of hydrogen in a simulation and on the right side the same in a real observation of the dwarf galaxy IC 1613.

According to Matthew Walker of Carnegie Mellon University, one of the authors of this research, the results obtained could be a smoking gun that brings us closer to understanding what dark matter is. The verification of dark matter heating can help new research of a dark matter particle.

The researchers intend to expand their study to a larger sample of dwarf galaxies, including fainter galaxies and testing a wider range of dark matter models. In the end, the importance of studies like this is seen in the contribution they give to the verification of these models with the possibility also for those who offer alternative models that don’t include the existence of dark matter to put them to the test.

Previous Post: Ultima Thule offers the first answers but leaves many questions open
Next Post: K2-288Bb is an interesting exoplanet confirmed thanks to the Exoplanet Explorers project