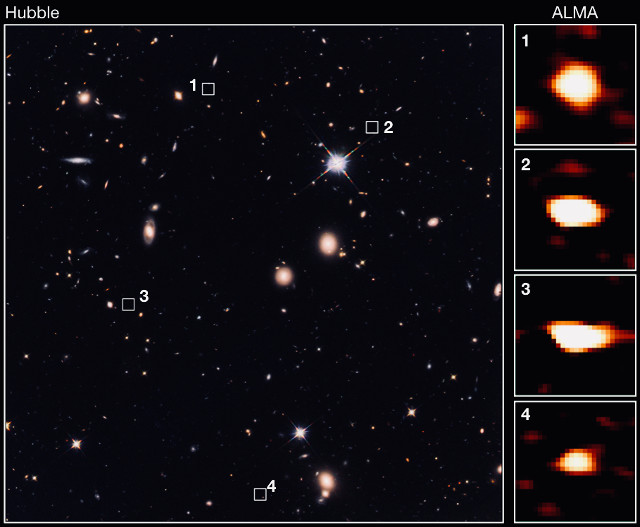 An article published in the journal “Nature” reports the discovery of 39 galaxies in the early universe. A team of researchers combined data from different telescopes to identify a group of galaxies dating back to the first two billion years after the Big Bang that were invisible to previous observations in their areas conducted at optical frequencies. Their study could offer new information on the evolution of galaxies, on the supermassive black holes at their center and also on the distribution of dark matter.

The instruments built in recent decades allowed astronomers to explore the early universe but they too have their limits. There was the suspicion that there were galaxies invisible to instruments such as the Hubble Space Telescope not only because of their distance but also because they’re massive and consequently contain a lot of dust that blocks several electromagnetic wavelengths. For this reason, a team from the Institute of Astronomy at the University of Tokyo tried to use other instruments sensitive to electromagnetic wavelengths able to pass through the dust.

Professor Kotaro Kohno, one of the authors of the research, explained that he and his colleagues had the first suspicions of the existence of those galaxies in the early universe thanks to the infrared data from NASA’s Spitzer Space Telescope, which detected 63 objects. To get a confirmation, they used the ALMA (Atacama Large Millimeter/submillimeter Array) radio telescope, inaugurated in March 2013, because it’s ideal for picking up the weak emissions that are distorted because the Earth is moving away from galaxies in the early universe and detected emissions from 39 of the 63 objects studied. Additional data got obtained using ESO’s VLT (Very Large Telescope) in Chile.

Tao Wang, the lead author of this research, explained that previous studies found galaxies in the early universe in which there was an extreme star formation activity but their population is rather limited. In the galaxies that he and his colleagues discovered, the formation is less intense but it’s still faster to that of the so-called starburst galaxies, an important factor to study the history of the universe and the formation of galaxies.

The image (Courtesy Wang et al. / The University of Tokyo/CEA/ NAOJ. All rights reserved) shows an image captured by the Hubble Space Telescope as part of the CANDELS (Cosmic Assembly Near-infrared Deep Extragalactic Legacy Survey) project with 4 small insets in which there’s nothing but in the same areas the ALMA radio telescope identified as many galaxies shown in the insets on the right with the matching numbers.

The 39 discovered galaxies are massive and this means that within them there’s a greater star density than in the Milky Way. Their inhabitants can enjoy a spectacular night sky but only thanks to relatively nearby stars because interstellar dust darkens distant stars. The supermassive black holes probably have masses proportional to their galaxies’ so we can expect them to be far more massive than the 4 million solar masses of the supermassive black hole at the center of the Milky Way.

David Elbaz, another of the authors of the research, explained that by keeping the observed star-forming rhythm, the galaxies discovered will become the first population of massive elliptical galaxies in the universe. That already happened over 11 billion years ago but the light that shows us the process has yet to arrive. The problem is that those galaxies are unexpectedly abundant and there’s also the problem that our dark matter models make it difficult to explain the formation of such massive galaxies in such a remote age.

To understand the discrepancy between the models and the discovery of those 39 galaxies, follow-up observations are needed, with the difficulty of having limited electromagnetic wavelengths to work with. Tao Wang explained that the lack of optical wavelengths makes spectroscopic studies that investigate stellar populations and the chemical composition of galaxies very difficult. This is another case in which the James Webb Space Telescope will be needed, hoping it will be launched in 2021, at last.

Previous Post: A heavily obscured primordial supermassive black hole discovered
Next Post: A study of the glitch in the Vela Pulsar