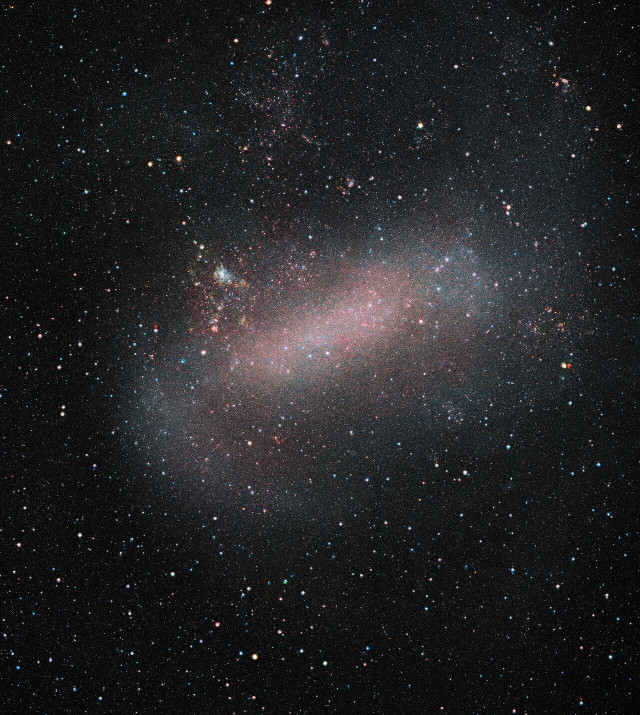 The Large Magellanic Cloud and the Small Magellanic Cloud are the subject of continuous studies because they’re relatively close to the Milky Way, being approximately 163,000 and 200,000 light years away from the Earth respectively. From the astronomical point of view they’re in the neighborhood and this makes it easier to observe them in detail to better understand the processes that take place within them, for example the evolution of galaxies. The VMC survey aimed to map the 3D structure of the two Clouds to reconstruct the history of star formation within them.

The top image (ESO/VMC Survey) offers a global view of the Large Magellanic Cloud while the bottom image (ESO/VMC Survey) shows some of the most spectacular regions within it. The analysis of 10 million stars in this dwarf galaxy made it possible to determine their age using cutting-edge models. The obtained maps, also of the Small Magellanic Cloud based on data of about 2.5 million stars, allowed to trace their morphological evolution with age, which defines different stellar populations, and other characteristics of the stars.

The studies of the two Magellanic Clouds are also useful to understand the interactions between them and those with the Milky Way. An enormous field of gas clouds called the Leading Arm of the Magellanic Stream connects these three galaxies but the Milky Way is slowly absorbing it and can be used in the future to form new stars. For example, this was the subject of a study reported in an article published in “The Astrophysical Journal” in March 2018.

According to the new research to be published, in the Small Magellanic Cloud there are populations of stars influenced by the interaction with the Big Cloud. It’s an example of the consequences of those interactions and reveals a complex history that continues to be studied. The Milky Way and the Magellanic Clouds are separate galaxies but their history must be studied taking into account the mutual influences.

Previous Post: An explanation for both visible light and X-ray emissions from a strange pulsar
Next Post: Collapsing cliffs and bouncing boulders on the surface of comet 67P/Churyumov-Gerasimenko