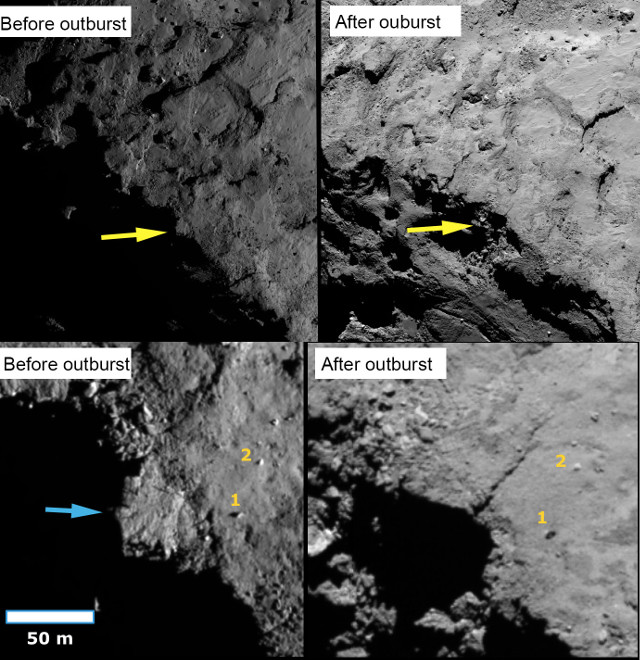 At the EPSC-DPS conference taking place in Geneva, Switzerland, new evidence was presented that on comet 67P/Churyumov-Gerasimenko there are collapsing cliffs and bouncing boulders. Some scientists examined the approximately 76,000 high-resolution photographs taken by the ESA’s Rosetta space probe’s OSIRIS camera to study the activity on the comet’s surface in the period in which it was active.

The Rosetta mission ended on September 30, 2016 with the impact of the space probe on the surface of the comet 67P/Churyumov-Gerasimenko. The analysis of the enormous amount of data collected until the last moment went on to try to understand the mechanisms in place during the period of activity, when the comet passes at a distance from the Sun sufficient to trigger the sublimation of volatile compounds.

At the EPSC-DPS conference, held jointly by the European Planetary Science Congress and the American Astronomical Society’s Division of Planetary Sciences, two new studies on comet 67P/Churyumov-Gerasimenko were presented. Ramy El-Maarry and Graham Driver of Birkbeck, University of London, examined the cliff called Aswan in the comet nucleus’s Seth region. Jean-Baptiste Vincent of the German space agency DLR’s Institute for Planetary Research examined boulders that bounce off the surface of the comet.

The area of ​​Aswan, with its landslides and avalanches, has already been the subject of various studies over the years for the changes noted during the period of activity. Among the most recent ones there’s an article published in the journal “Icarus” in September 2018 about this type of activity on comets. Ramy El-Maarry and Graham Driver identified an outburst (link to a PDF file) with a notable collapse along the division between the comet 67P / Churyumov-Gerasimenko’s northern and southern hemispheres.

The top image (ESA/Rosetta/MPS for OSIRIS Team MPS/UPD/LAM/IAA/SSO/INTA/UPM/DASP/IDA (CC BY-SA 4.0)) shows the area examined by Ramy El-Maarry and Graham Driver. In the upper panels the yellow arrows show the location before and after an outburst, respectively in September 2014 and in June 2016. In the lower panels there are close-up images of the same areas with a blue arrow indicating a scarp that collapsed after the outburst and numbers that indicate two boulders as reference points.

In the case of the boulders examined by Jean-Baptiste Vincent, in the other presentation (link to a PDF file) a boulder around 10-meter long apparently fell from a cliff to bounce several times on comet 67P/Churyumov-Gerasimenko’s surface without breaking, leaving its footprints. The activity of the comet can cause such phenomena, in some cases even ejecting rocks into space due to its reduced gravity.

Matt Taylor, Rosetta’s project scientist, pointed out that the mission dataset continues to surprise us. Indeed, almost three years after the end of the mission, the studies on the data collected keep on offering new information. These are not revolutionary discoveries but they get added to those made in previous years to better understand the processes that take place on a comet during its period of activity. 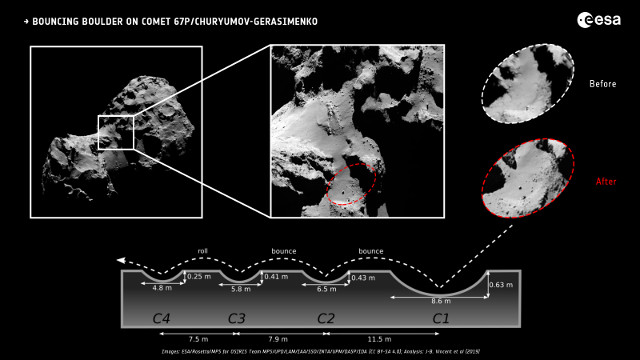 Previous Post: The VISTA telescope offers new details of the Magellanic Clouds
Next Post: Six galaxies were observed as they became quasars in a very short time