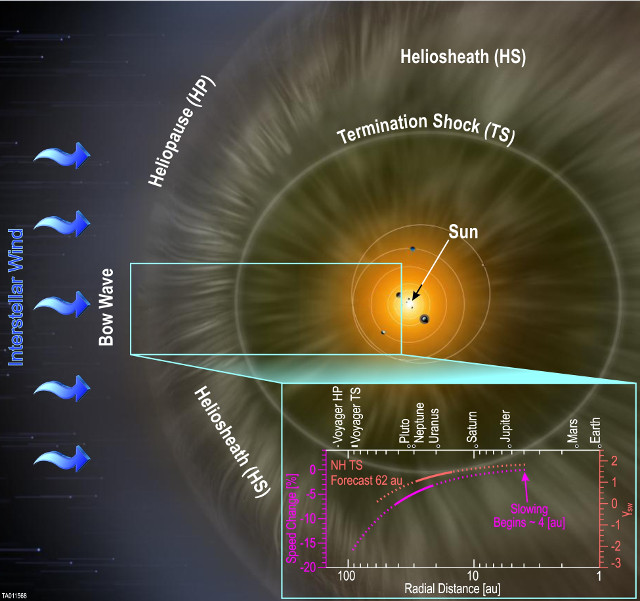 In particular, the New Horizons space probe’s SWAP instrument carries out detailed daily detections of the solar wind and other particles such as ions from interstellar space that enters the heliosphere as a neutral material and get ionized by sunlight and by interactions with solar wind ions. These interstellar materials increase with the distance from the Sun and, according to the theory, when they get ionized they’re picked up by the solar wind which as a consequence slows down and warms up.

The heliosphere changes continuously following the solar cycles and in different areas the boundaries are at different distances from the Sun, the reason why the two Voyagers crossed the termination shock at very different distances from the Sun. Measurements such as those made by the New Horizons space probe’s SWAP instrument, along with the information available on solar wind temperature and density will help estimate when it will cross termination shock as well.

The image (Courtesy Southwest Research Institute; background artist rendering by NASA and Adler Planetarium. All rights reserved) shows the situation of the heliosphere and the solar wind resulting from the detections examined. The estimates will be improved over time thanks to the data that the New Horizons space probe keeps on sending. This means an improvement in our understanding of both the influence of solar activity through its cycles and the effects of the arrival of particles from interstellar space. Even from this point of view, the New Horizons mission continues to be extraordinary.

Previous Post: Remains of glaciers that sculpted the territory of Deuteronilus Mensae on Mars
Next Post: The SpaceX Dragon spacecraft blasted off for its CRS-19 mission for NASA