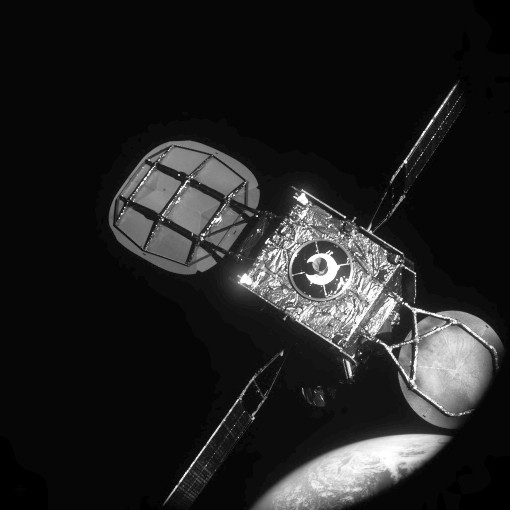 Intelsat and Northrop Grumman have announced that the communications satellite Intelsat 901 (IS-901) has returned to active service after the Mission Extension Vehicle 1 (MEV-1) spacecraft docked on February 25, 2020. MEV-1 will allow Intelsat 901 to maintain its orbit and attitude again for almost 5 years, extending its life. It’s the first time that a satellite has returned to activity thanks to this type of mission.

In geostationary orbit, at about 36,000 kilometers of altitude, in which communications satellites work, there are fewer problems of space debris than in the low earth orbit. However, there are old satellites that are still fully functional that ran out of the fuel they need for the small orbital and attitude corrections that keep them stable, allowing communications with the ground. Building and launching another satellite of this kind costs a few hundred million USD, but so far there was no other choice. The MEV-1 mission changed the situation.

A project to extend the life of a satellite using a service spacecraft was started in 2011 by ViviSat, at the time run by U.S. Space and ATK. Subsequently, the company was dissolved and that development activity fully taken over by ATK, later acquired by Northrop Grumman.

On October 9, 2019, the Mission Extension Vehicle 1 (MEV-1) spacecraft was launched on a Proton-M rocket. On February 25, 2020, the MEV-1 successfully completed the docking maneuver with the IS-901 satellite, which in the meantime had further increased its orbit. The photo (Courtesy Northrop Grumman. All rights reserved) shows IS-901 seen by MEV-1 during the approach maneuvers concluded with the hooking. These are the first photos of a satellite in geostationary orbit taken by another satellite. IS-901 returned to service on April 2, but the announcement of the mission success came only after more than two weeks.

The MEV-1 service spacecraft works in some ways like a tugboat, with the difference that it will remain docked for almost 5 years. At the end of February 2025, MEV-1 will detach from IS-901, leaving it in an orbit appropriately called graveyard orbit to reach another satellite to be put back into service.

Northrop Grumman didn’t specify how many satellites can be put back into service by a MEV spacecraft. What we do know is that they’re relatively small and simple spacecraft since they only have a propulsion system and a docking system to dock with much larger communication satellites. This means that building and launching one is much less expensive than building and launching a communications satellite. Offering more years of service to old satellites with instruments still working allows to have less junk in orbit and fewer launches of new satellites.

Another MEV spacecraft is being set up for a similar mission. According to Northrop Grumman’s plans, it’s supposed to be launched by 2020, but commercial launches are currently blocked due to the Covid-19 pandemic. Despite possible delays, there will likely be a growth in this type of service in the coming years.

Previous Post: Kepler-1649c is an Earth-sized exoplanet discovered thanks to human verification
Next Post: A strange abundance of carbon monoxide in the interstellar comet 2I/Borisov