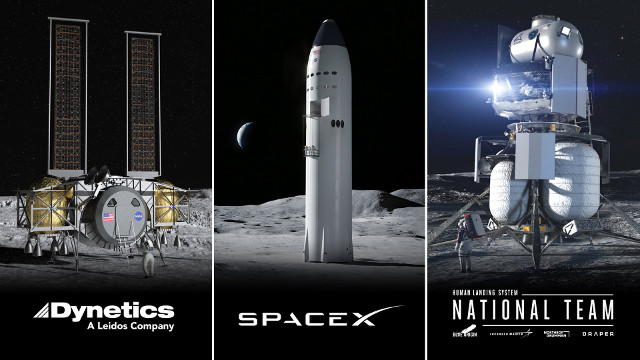 NASA has announced the choice of three companies to design and develop human landing systems for the Artemis program. These are essentially plans for a lunar lander among which one will be selected to be built for the mission that, according to plans, is supposed to bring American astronauts back to the Moon by 2024. The companies selected are Blue Origin (actually the first contractor for a group called National Team), Dynetics, and SpaceX. This stage of development involves a 10-month base period during which companies and NASA will work together on the selected projects. The total contract value is $967 million.

NASA continues to maintain 2024 as the year when astronauts are scheduled to return to the Moon. After the decision to eliminate the use of the Lunar Gateway, the space station that should only be used for future development at this point, the agency needs a lander to transport the astronauts from the Orion spacecraft to the Moon and bring them back into orbit. Among the many proposals received for what is now defined generically a Human Landing System (HLS), NASA chose three. The image (Courtesy Blue Origin, Dynetics, and SpaceX) shows the artistic concepts of the three landers.

Blue Origin. Jeff Bezos’ company has already announced some plans on its own, but in this case leads a group called the National Team which includes Lockheed Martin, Northrop Grumman, and Draper. It will receive $579 million to develop a three-stage system with a lander that will use the BE-7 engine, one of Blue Origin’s projects under development. Lockheed Martin will build the elements for the ascent, which include the crew cabin with elements in common with the Orion spacecraft. Northrop Grumman will build the transfer element based on its Cygnus cargo spacecraft and is developing a refueling system for a sustainable lander. Draper will supply the elements related to guidance, navigation and control, avionics, and software systems with elements in common with the ones developed in the past for NASA. It will be launched on the New Glenn rocket, which Blue Origin is developing.

Dynetics. This Leidos subsidiary with 25 subcontractors that include companies that are already working with NASA such as Sierra Nevada Corporation (SNC) will receive $253 million to develop a single-stage system that allows both descent to the Moon and subsequent ascent into orbit. The project includes the possibility of docking with both the Orion spacecraft and the Lunar Gateway for possible future developments. Fuel tanks can be sent separately to allow the lander to be reused. The lander could be launched on various rockets.

SpaceX. Elon Musk’s company will receive $135 million to develop its Starship, a reusable vehicle that can be refueled by another Starship used as a sort of space tanker. It will be launched on the Super Heavy rocket that SpaceX is developing and will be reusable as well. The Starship is much larger than the other landers, and can be used to transport both astronauts and cargoes to the Moon.

Doubts remain about the availability of the SLS, the super rocket that is supposed to send the Orion spacecraft with astronauts on board beyond Earth’s orbit. The Covid-19 pandemic represents a new problem for the development of the Artemis program, but NASA administrator Jim Bridenstine recalled that the Apollo program was developed during a chaotic period for the Vietnam war and civil rights struggles. However, the development of SLS is piling up delays over delays leaving little to optimism.

Next year NASA will evaluate the progress of the three projects to choose the one to use for the first Artemis program’s Moon mission. All three might be used on subsequent missions. Another possibility is that for the first missions NASA will launch astronauts on the SLS, then switch to much cheaper solutions if the Super Heavy and New Glenn rockets are available. The official statements mention private companies only for the development of the Moon lander and for the support services, but the controversy over the huge costs for the launch of the SLS could lead to more radical choices. 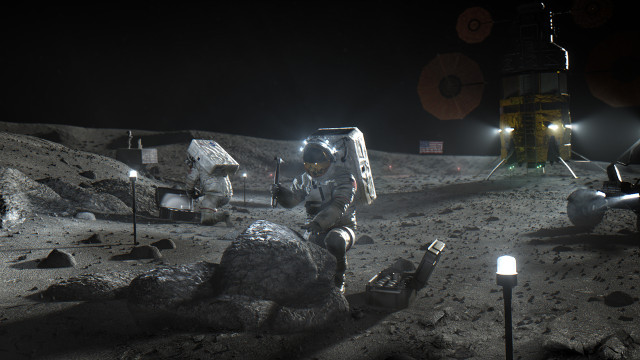 Previous Post: A nailed prediction for the dance of two supermassive black holes in the galaxy OJ 287
Next Post: 15 protoplanetary disks seen at infrareds by the VLTI