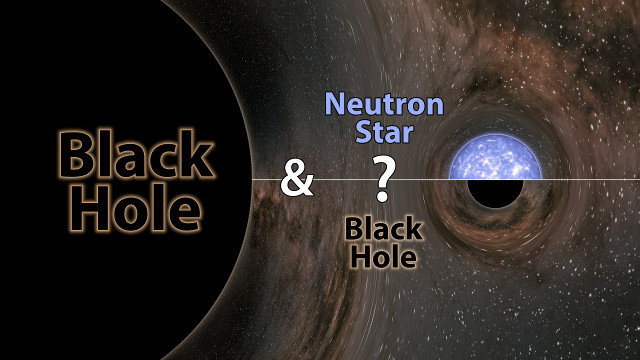 An article published in “The Astrophysical Journal Letters” reports a study on the origin of gravitational waves detected in the event cataloged as GW190814 on August 14, 2019, in which a black hole with a mass about 23 times the Sun’s merged with an object with a mass about 2.6 times the Sun’s whose nature is uncertain. The scientists of the LIGO and Virgo collaborations analyzed the data collected by the network of interferometers that recorded the gravitational waves emitted by that event. The problem is that the mass of the less massive object is within a gap where it’s not currently possible to say whether a compact object is a neutron star or a black hole.

Neutron stars and black holes are two possibilities for what remains of a massive star after its death. One problem is figuring out how much mass is needed for the core left after a supernova for its collapse to go far enough to become a black hole. So far, the most massive known neutron star has a mass 2.5 times the Sun’s while the least known black hole has a mass about 5 times the Sun’s. In what’s called the mass gap between those two values ​​it’s not clear what we can find, and so far it wasn’t even clear if there could be anything. A merger involving an object within that mass gap changes something about this problem.

Gravitational-wave astronomy has existed for a few years, but now the LIGO and Virgo detectors have recorded many merger events between compact objects, in most cases between two black holes. The event cataloged as GW190412 was generated by the merger between two black holes with very different masses, in which the more massive had a mass that was about four times the less massive. In the event GW190814, originated about 800 million light-years from Earth, the ratio between the two masses is even more unbalanced since the object which is certainly a black hole is about nine times more massive than the other object, whose nature is a mystery that constitutes the most interesting part of this research.

Uncertainty remains over the nature of the 2.6 solar-mass compact object. The image (LIGO/Caltech/MIT/R. Hurt (IPAC)) shows a scheme of this merger with the artistic representation of both possibilities. This means that it was the most massive neutron star known so far or the least massive black hole known so far. In short, in any case, it’s an interesting discovery, but for the moment it offers no answers to the problem of the mass gap.

Charlie Hoy, a member of the LIGO Collaboration, explained that this could be the first of a new population of compact binary objects. The detectors are becoming more and more sensitive and this will allow to observe more signals of this type to identify the populations of neutron stars and black holes in the universe.

In the end, the GW190814 event left more questions than answers, the kind of discovery that can bring progress. Other events with pairs of compact objects of very different masses and objects whose mass falls in the gap between 2.5 and 5 solar masses could bring important data to better understand the physics of neutron stars and black holes.