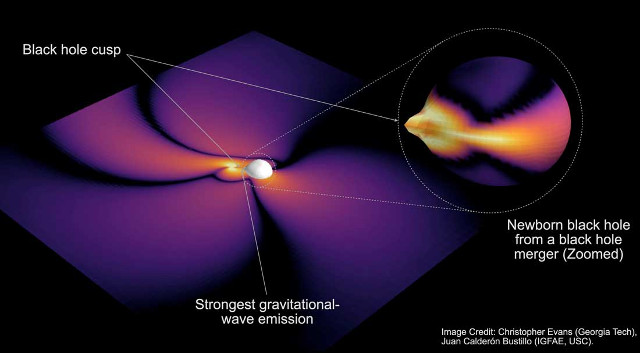 An article published in the journal “Communications Physics” reports a study on black hole mergers that shows the relationship between the gravitational signal emitted by that event and the shape of the black hole produced by it. A team of researchers led by Juan Calderón Bustillo – Marie Curie Fellow of the Galician Institute of High Energy Physics in Santiago de Compostela, Spain, created computer simulations of these mergers establishing that the shape of the black hole produced, distorted during the moments while it’s settling and similar to a chestnut, influence the characteristics of gravitational waves. The “chirps”, as the multiple frequency peaks produced in the gravitational emissions, could be detected if the line of sight were parallel to the merger’s orbital plane.