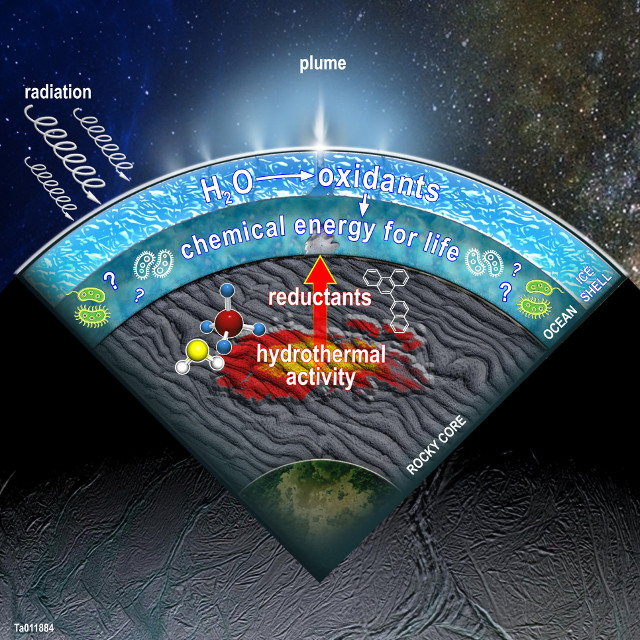 An article published in the journal “Icarus” reports a study on the conditions under the surface of Saturn’s moon Enceladus, which indicate possible chemical processes that could support the metabolism of life forms. A team of researchers used data collected by the Cassini space probe to create a model of the chemical processes taking place in the Enceladus’ underground ocean, and concluded that there are possible redox chemical reactions that can fuel the metabolism of life forms.

The Cassini space probe mission ended on September 15, 2017, but the wealth of data collected over the years continues to generate new studies. Enceladus became an important mission target after the discovery of an ocean of liquid water beneath its frozen crust. The identification of plumes of vapor and even complex molecules aroused much interest.

An article published in the journal “Science” in April 2017 reported the detection of molecular hydrogen, which is used by many Earth’s anaerobic microorganisms in their metabolism. Dr. Hunter Waite of the Southwest Research Institute in San Antonio, Texas, USA, led the team that announced that discovery and was part of the team that conducted this new study in which other possible molecules were considered as part of the metabolism of microorganisms in Enceladus’ underground ocean.

It’s not possible to directly explore Enceladus’ subsoil, but many clues point to the presence of hydrothermal sources on the ocean floor. It’s an environment that also exists on Earth, and life on the planet could have been born right there. Those sources warm the environment and inject minerals into it that allow many life forms to thrive.

Complex chemical processes can include redox reactions that, in very simple words, mean that both oxidation and reduction reactions are included. Life cycles are based on this type of reactions, so the researchers tried to find a model that would allow for such a situation on Enceladus.

On Earth the oxygen present even in the depths of the sea allows oxidation, the problem was to understand if it could be present on Enceladus as well. According to the researchers, ionizing radiation arriving from space can generate molecular oxygen and hydrogen peroxide. The image (Courtesy Southwest Research Institute. All rights reserved) shows an illustration of the Enceladus cross-section with the chemical processes studied using geochemical models.

There are various possibilities of redox reaction chemistry, but according to the model created, aerobic and anaerobic chemical reactions similar to those used by Earth’s microorganisms could take place on Enceladus. The reaction that leads to the generation of methane is the one that offers results closest to those detected directly on Earth.

Christine Ray, a PhD student in physics at the Southwest Research Institute and lead author of the research, explained that she and her colleagues compared their estimates of free energy with those of ecosystems on Earth and determined that, overall, the values ​​for aerobic and anaerobic metabolisms meet the minimum requirements or exceed them. These results indicate that oxidant production and oxidation chemistry could help support possible life forms and a metabolically diverse microbial community on Enceladus.

It must be said that this research is based on geochemical models that show a possibility based on clues collected by the Cassini space probe, without the direct detection of chemical processes essential to confirm it. There are plans for new missions with space probes capable of studying Enceladus much better than Cassini, but right now these are only proposals. There’s still a lot of work to be done to understand if the ocean of Enceladus really hosts life forms. Research continues because it’s a really intriguing possibility.

Previous Post: The Moon samples collected by the Chinese Chang’e-5 mission arrived on Earth
Next Post: The Molten Ring is a truly spectacular Einstein ring