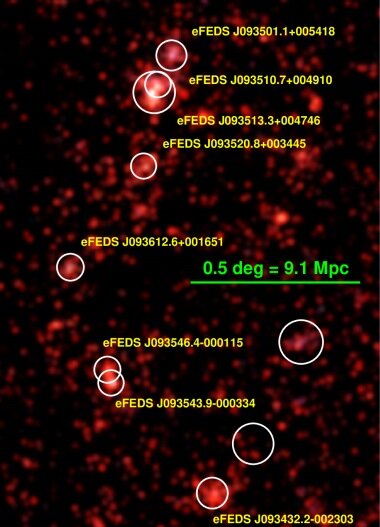 An article to be published in the journal “Astronomy & Astrophysics” reports the discovery of a galaxy supercluster. A team of researchers led by Vittorio Ghirardini of the Max Planck Institute for Extraterrestrial Physics in Garching, Germany, analyzed data from the eFEDS survey conducted with the Spektr-RG space telescope’s eROSITA instrument identifying a structure composed of eight different galaxy clusters. Follow-up observations with the LOFAR and uGMRT radio telescopes made it possible to confirm that it’s a supercluster thanks to the identification of filaments that unite the various galaxies. The possibility of improving our knowledge of the cosmic filament web is one of the reasons why it’s important to find these superclusters.

Several galaxies can be gravitationally bound to each other even if they’re millions of light-years apart. A cluster can be made up of many galaxies and in turn these clusters can form even more colossal structures, the largest in the universe. However, it’s not easy to understand if different clusters are bound in superclusters. In this case, relatively faint clusters about four billion light-years from Earth were difficult to study. Such a task required an advanced instrument like eROSITA, the main instrument of the Spektr-RG space telescope, launched on July 13, 2019.

The eFEDS (eROSITA Final Equatorial Depth Survey) allowed to collect the data necessary to start this research, but not enough to prove that eight galaxy clusters were bound in a supercluster. This task required follow-up observations with the LOFAR (Low Frequency Array) and uGMRT (upgraded Giant Metrewave Radio Telescope) radio telescopes, which allowed to identify among other things the filamentous structures that connect the eight galaxy clusters that form the supercluster.

This discovery is interesting for various reasons related to different cosmological researches. The cosmic filaments form a web that could contain baryonic matter, which is the ordinary matter, which results from theoretical calculations but only recently started being found thanks to studies on these filaments. In superclusters, other phenomena are taking place such as the dissipation of gravitational energy within them with the acceleration of particles and the amplification of magnetic fields.

The researchers also made some other interesting discoveries about the various galaxy clusters. In particular, the northernmost one shows signs of galaxy merger activity that is involving some galaxies in various merger phases. These signs are confirmed by the identification of a radio halo and two radio relics. These are radio sources that can be present in various areas of galaxy clusters and are both associated with galaxy mergers. The mechanisms associated with these phenomena are still poorly understood, so discovering new radio halos and radio relics will be useful to expand the samples to be studied.

the researchers expect new discoveries from the following surveys conducted with the eROSITA instrument, which already demonstrated the quality of results after just a few months of activity. Research on various cosmic phenomena will continue to increase with the arrival of new data, also to understand phenomena related to immense structures such as galaxy superclusters. 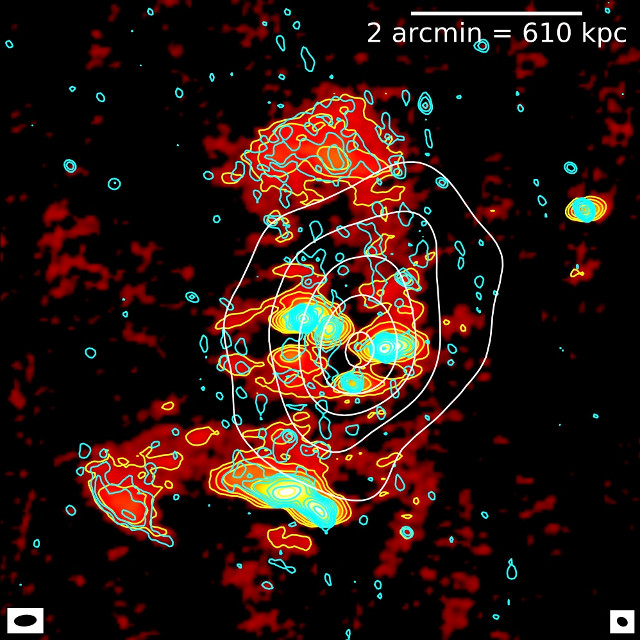