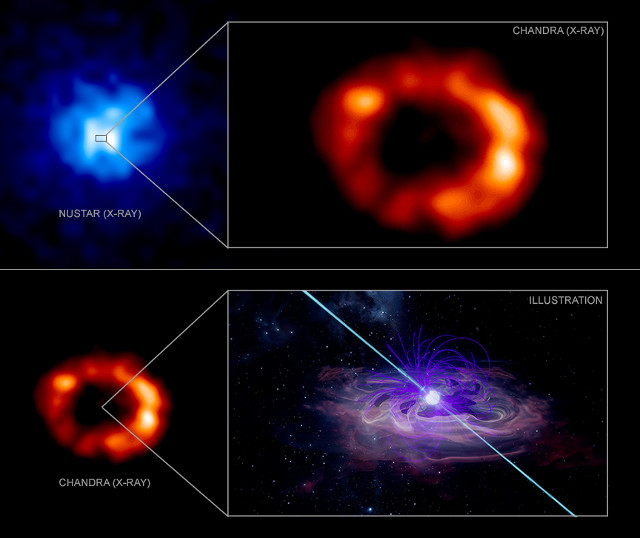 An article published in “The Astrophysical Journal” reports new evidence that a neutron star formed after the supernova SN 1987A. A team of researchers led by Emanuele Greco, Ph.D. student at the University of Palermo and associated with the Italian National Institute of Astrophysics used observations conducted with NASA’s Chandra X-ray Observatory and the NuSTAR space telescope to identify emissions that are compatible with a so-called pulsar wind nebula, an X-ray emitting nebula powered by a pulsar, which is a type of neutron star, inside it.

The supernova SN 1987A was spotted in the Large Magellanic Cloud, one of the Milky Way’s dwarf galaxy satellites, on the night of February 23-24, 1987. In subsequent years, many astronomers sought evidence of the nature of what remained after the explosion of the star that was cataloged as Sanduleak -69° 202a, or simply Sk-69 202, the blue supergiant progenitor of the supernova SN 1987A.

It wasn’t an easy search, but several clues had already led to think of the presence of a neutron star. Two articles published in “The Astrophysical Journal” in July 2020 offered important clues thanks to the ALMA radio telescope and now further investigations, this time focused on X-ray emissions, may have brought evidence that gives reasonable certainty.

The problem is due to the materials ejected from the progenitor star during the explosion, which are now cold and dense when seen from Earth. The consequence is that they block many electromagnetic emissions that would be very useful to locate the object at the center of the supernova remnants.

X-rays are among the emissions that pass through the remnants of supernova SN 1987A, so instruments like the Chandra X-ray Observatory and the NuSTAR Space Telescope, launched on June 13, 2012, can provide valuable information. In fact, the data collected by these two instruments allowed to detect X-rays at relatively low energies from the supernova debris hitting the materials around them and evidence of the presence of high-energy particles thanks to their X-ray emissions at higher energies.

The high-energy particles spiral around magnetic field lines. Their X-ray emissions can have two explanations: a pulsar wind nebula or particles that are accelerated by the shock wave generated by the supernova. The researchers believe the pulsar wind nebula is more likely for two reasons. The X-ray emissions remained virtually the same between 2012 and 2014 while radio wave emissions even increased while they too should have decreased. Calculations indicate that it would take 400 years to accelerate electrons to the highest energies detected by NuSTAR, more than ten times the age of the supernova remnants.

The image (Chandra (X-ray): NASA/CXC/Univ. di Palermo/E. Greco; Illustration: INAF-Osservatorio Astronomico di Palermo/Salvatore Orlando; NuSTAR (X-ray): NASA/JPL-CalTech) shows the remnants of the supernova SN 1987A seen by the NuSTAR space telescope and the Chandra X-ray Observatory together with an illustration of the pulsar powering a pulsar wind nebula.

All the X-ray emission data from supernova SN 1987A remnants collected may have provided enough evidence to establish that a pulsar-type neutron star is indeed born confirming the clues gathered in previous studies. It would be the youngest known neutron star, and the possibility of studying it practically from its birth would help to understand the processes that lead to the formation of these objects and to obtain more information on what happens in the years following a supernova.

Previous Post: Mission NG-15 accomplished: the Northrop Grumman Cygnus spacecraft has reached the International Space Station
Next Post: A study of P/2019 LD2, the comet that was initially mistaken for an asteroid