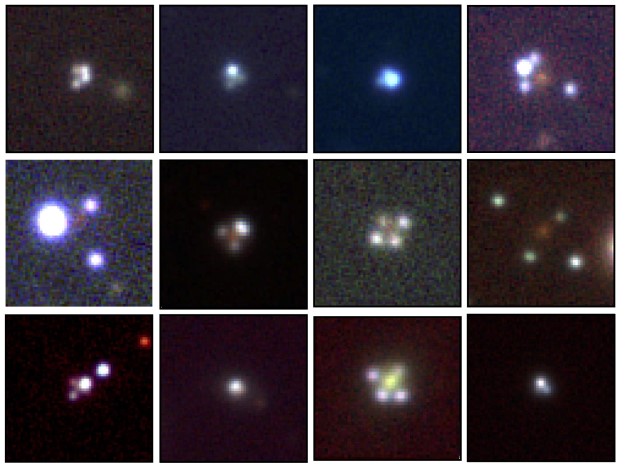 An article accepted for publication in “The Astrophysical Journal” reports the identification of 12 quasars whose image has been quadrupled by gravitational lenses obtaining images similar to the so-called Einstein Cross. Researchers from the Gaia Gravitational Lenses (GraL) group used data collected by ESA’s Gaia space probe and NASA’s WISE space telescope and examined them with machine learning algorithms. In this way, it was possible to recognize quasar candidates whose image was distorted by gravitational lenses leading to the identification of 12 Einstein crosses.

The Gaia space probe is a special space telescope that is conducting repeated observations of the entire sky every few months, obtaining previously unattained details of objects of various kinds. The Data Release 2 (DR2), published on April 25, 2018, provided data examined by the GraL group to find rare cases of Einstein crosses. So far, around 50 of them have been identified, but finding new candidates is a long and difficult job.

Having the position of Einstein cross candidates, they were subsequently the subject of follow-up observations with ground-based telescopes. They were able to confirm that 12 of them were actually quasars whose image is quadrupled by a galaxy between the quasar and the Earth whose gravity generates a gravitational lensing effect by distorting the light passing near it. The top image (The GraL Collaboration) shows a montage that includes the 12 Einstein crosses.

The search for these quasars has important scientific purposes. Their light makes different trajectories due to the gravitational lens, and that offers more useful information to use to estimate the expansion rate of the universe, which at the moment is among the astronomical questions at the center of most discussions. The gravitational lensing effect also offers information about the galaxies acting as lenses, and that allows for studies on the dark matter present in those galaxies. This is a complex type of research that requires observations at different bands of the electromagnetic spectrum, so they can take a long time. It’s a case in which a discovery represents only the first phase of a research. 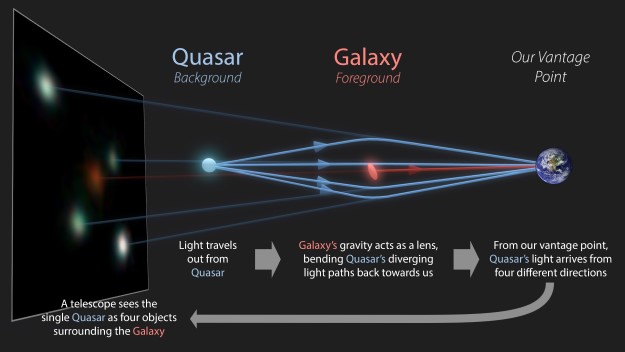 Previous Post: Three astronauts included in the Expedition 64 have reached the International Space Station
Next Post: An analysis of the complex organic molecules found in the Perseus Molecular Cloud