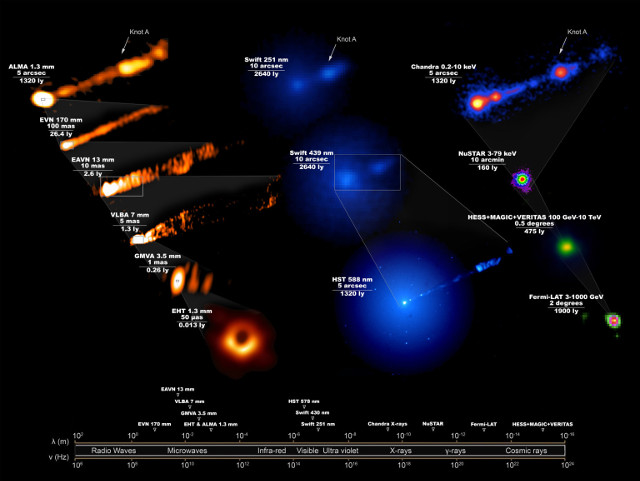 An article published in “The Astrophysical Journal Letters” reports the results of multiband observations of the area around the supermassive black hole at the center of the galaxy M87. 33 members of the Multiwavelength Science Working Group of the Event Horizon Telescope (EHT) led a large team of researchers who put together data collected by the various radio telescopes that made up the EHT in the extraordinary campaign of observations which led to the historical photo published in 2019 and other data of observations in other electromagnetic bands conducted with various space and ground-based telescopes. This allows to conduct more in-depth analyzes thanks to the completeness of the emissions detected not only by the supermassive black hole but also by its jets that eject materials at very high speeds.

The photo of the area around the supermassive black hole at the center of the galaxy M87 released in 2019 represents an important moment in the history of astronomy. The data collected by a group of coordinated radio telescopes are very important from the scientific point of view to examine the processes taking place in the observed area, yet they are far from complete. Emissions from that area span all bands of the electromagnetic spectrum and are important in various studies. For this reason, in spring 2017, the observation campaign also involved space and ground-based telescopes that detected emissions in the various bands. About 760 people participated in this task.

Jets of materials ejected from a supermassive black hole at speeds close to the speed of light are considered the most likely source of high-energy cosmic rays. These particles that bombard the Earth are still in many ways mysterious, and in the case of the ones emitted by these black holes, there are questions about the position in which they are accelerated. The gamma rays produced by the collisions of these cosmic rays offer valuable information and this study suggests that they are produced far from the supermassive black hole’s event horizon. The contribution of the Swift, NuSTAR, and Fermi-LAT space telescopes was crucial thanks to their ability to detect emissions at the highest energies.

The wealth of data in the entire electromagnetic spectrum offers a greater amount of information on the materials around the supermassive black hole, on the jets emitted by it, and on the influence of the black hole on the central area of ​​the galaxy M87. These are the first results based on multiband observations, but the studies will continue, also using data from subsequent observation campaigns to better understand the processes taking place around these extreme objects and obtain new tests of the theory of relativity.

Previous Post: An analysis of the complex organic molecules found in the Perseus Molecular Cloud
Next Post: The return of three astronauts from the International Space Station marks the end of Expedition 64