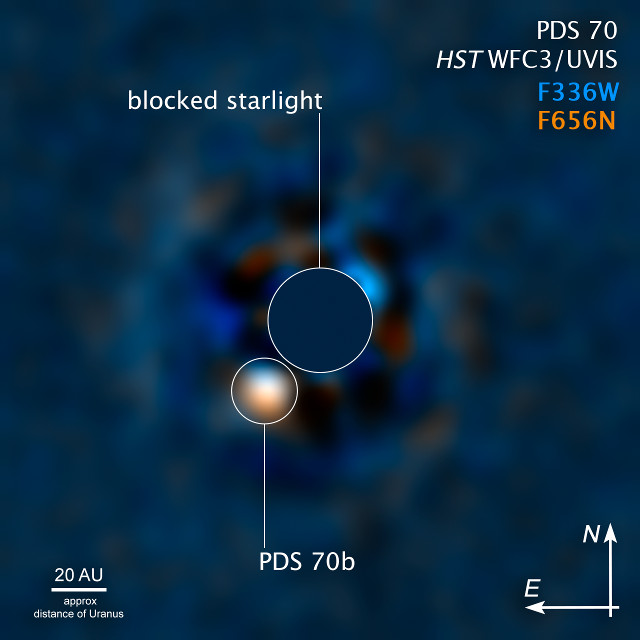 An article published in “The Astrophysical Journal” reports the first estimates of the growth of a young gas giant exoplanet. A team of researchers used observations conducted with the Hubble Space Telescope of the exoplanet PDS 70b exploiting its sensitivity to ultraviolets emitted by hot gas that gets swallowed by the young giant. This study opens the door to new possibilities for estimating the growth of gas giant planets.

The planetary system in its formation phase around the star PDS 70 has been known for several years thanks to observations conducted with various instruments. In 2018, exoplanet PDS 70b was the first forming planet photographed by the SPHERE (Spectro-Polarimetric High-contrast Exoplanet REsearch) instrument installed on ESO’s VLT (Very Large Telescope), capable of capturing direct images of exoplanets.

The images of a gas giant planet that is very young in astronomical terms, given that it’s estimated to be about 5 million years old and hasn’t yet completed its formation, are very interesting. There are theoretical models on the growth of these planets but so far it wasn’t possible to test them. To try to observe the growth of the exoplanet PDS 70b, the researchers used a new technique, based on the ultraviolet emissions of very hot gases falling on it.

The exoplanet PDS 70b has reached a mass that is about five times Jupiter’s but its growth rate has decreased to the point that, if it continued unchanged for another million years, the further increase in mass would be only one hundredth of Jupiter’s. This study indicates that PDS 70b is at the end of its formation process but repeated observations will be required to assess changes in the growth rate.

The hot gases that are still falling on the exoplanet PDS 70b come from a circumplanetary disk around it that is composed of materials that were subtracted from the large protoplanetary disk that is circumstellar. One hypothesis is that magnetic field lines extend from the circumplanetary disk to the atmosphere of PDS 70b channeling materials towards its surface. This would cause the formation of local hot spots at least ten times hotter than the rest of the planet and very bright at ultraviolets, so they could be visible in the observations.

This technique to observe gas giant planets still in their formation phase offers new possibilities to understand those processes and test theoretical models. Consequently, this will help to understand how Jupiter and the other gas giants of the solar system formed.