An article published in “The Astrophysical Journal” reports a calculation of the expansion velocity of the universe based on type Ia supernovae. A team of researchers led by Professor Maria Giovanna Dainotti used a sample of 1048 supernovae that have very different distances from Earth, dividing them into groups based on their distance. The values ​​obtained are decreasing starting from the nearest supernovae, and those obtained using the most distant supernovae approach the value based on the cosmic microwave background radiation.

It will be necessary to expand the sample to verify that there are no instrumental problems, and if the values ​​are really decreasing it may really be necessary to investigate the physical laws such as changes regarding our knowledge of gravity.

The Hubble constant, as the expansion velocity of the universe is called, has been calculated in several different ways ranging from the use of cosmic microwave background radiation to that of supernovae, quasars, cepheids, red giants, and more. What was defined as a tension in the field of physics is caused by incompatible values, too different even taking into account their margins of error. One possibility is that we need to expand our knowledge of physics to find the explanation, but perhaps the problem is in the limits of our instruments. The bottom image (Courtesy Khetan et. Al) shows different values ​​of the Hubble constant calculated in the last few years in various ways.

In the search for a solution to this tension, the team led by Maria Giovanna Dainotti, Assistant Professor at the National Astronomical Observatory of Japan and the Graduate University for Advanced Studies, Sokendai and a scientist affiliated with the Space Science Institute in the USA, tried to calculate the Hubble constant using type Ia supernovae. This is a technique already used in the past but this time the sample of 1048 supernovae was divided into subsamples based on their distance.

The results of this variant of the supernova-based technique indicate that the Hubble constant is not constant but decreases as the supernovae’s distance increases. The values ​​obtained using the most distant supernovae approximate the value calculated using the data from the cosmic microwave background radiation, which dates back to the earliest period of the universe’s history.

Claiming that the Hubble constant isn’t constant at all is a big deal and requires confirmation. A possible alternative is that some instrumental problem related to the detections determines the different results depending on the distance of the supernovae. For this reason, the Hyper Suprime-Cam camera of the Subaru telescope in Hawaii is now being used to search for more supernovae to examine to enlarge the sample and reduce uncertainties regarding the collected data. A possible measurement calibration problem was theorized in an article published in the journal “Astronomy & Astrophysics” in March 2021, therefore investigations on the subject are already underway, exploring various possibilities.

At the moment the possibility remains open that the solution is in physical laws that we know only partially. Maria Giovanna Dainotti’s team mentioned the possibility of modified gravity, perhaps to finally reach a unified theory that brings together quantum physics and relativistic physics. In short, behind the precise measurement of the Hubble constant, there could be a deeper understanding of the cosmos. 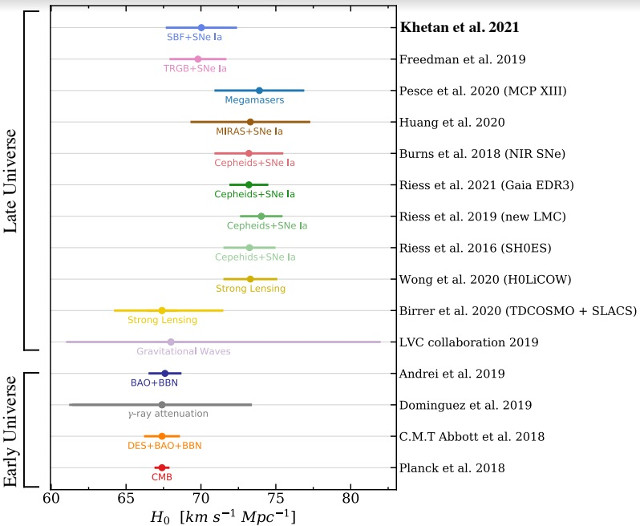 Previous Post: The exoplanet TOI-269 b is an interesting warm sub-Neptune
Next Post: New confirmations that sub-Neptune planets can transform into super-Earths