Two articles, available here and here, published in the journal “Nature” report different studies on the materials present in the atmospheres of comets, which appear to contain iron and nickel even in the ones far from the Sun. Jean Manfroid, Damien Hutsemekers, and Emmanuel Jehin used data collected by the UVES spectrograph of ESO’s VLT in Chile to analyze the atmospheres of various comets detecting the presence of both iron and nickel. Piotr Guzik and Michał Drahus used the X-shooter spectrograph, also of the VLT, to examine in particular the interstellar comet 2I/Borisov detecting the presence of nickel. They were surprising results because the sublimation of heavy metals was thought possible only near the Sun.

The presence of heavy metals in comets isn’t surprising at all, but if their distance from the Sun remains greater than the Earth’s, scientists expect those elements to remain in the nucleus. In the case of comets approaching the Sun, the emissions that directly strike them may be strong enough to cause the sublimation not only of the various icy compounds but also of metals. But now two studies show a similar situation even in comets that remain far from the Sun.

Jean Manfroid, Damien Hutsemekers, and Emmanuel Jehin, three researchers from the University of Liege, Belgium, have been studying comets using the Very Large Telescope (VLT) for almost twenty years but only now have they realized the presence of heavy metals in the atmospheres of comets far from the Sun. This discovery came following the examination of the data collected by the UVES (Ultraviolet and Visual Echelle Spectrograph) instrument from various comets at different distances from the Sun. This type of examination allows to identify the traces that each chemical element leaves in the electromagnetic emissions that come from the observed object, in this case from comets.

The three researchers noted the traces left by neutral iron and nickel atoms in various comets. The identification was difficult also because the quantity of these metals is very small since for every 100 kg of water present in the atmospheres of comets there’s about 1 gram of iron and an almost equal quantity of nickel.

The discovery of iron and nickel in the atmospheres of comets even three times the Earth’s distance from the Sun is surprising also because iron is generally present in quantities 10 times higher than nickel. According to the researchers, they could come from a special material on the surface of the cometary nucleus that sublimates at low temperatures, releasing both elements in very similar quantities. Follow-up studies are needed to try to identify that material.

Piotr Guzik and Michał Drahus, two researchers from the Astronomical Observatory of the Jagiellonian University in Krakow, Poland, focused on interstellar comet 2I/Borisov (Bottom image with its spectrum ESO/L. Calçada/O. Hainaut, P. Guzik and M. Drahus). About a year and a half ago, this comet passed relatively close to Earth and was about 300 million kilometers from the Sun. Among the various instruments used to study it was the VLT’s X-shooter spectrograph. Again, the examination was surprising as traces of nickel were found in its atmosphere.

The possibility of the sublimation of heavy metals even at considerable distances from the Sun is interesting, and the two studies also show the similarities between an interstellar comet and the comets native to the solar system. Comets are being studied because they’re considered fossils left over from star systems’ formation phase, and studies on 2I/Borisov suggest that there are similar processes for all of them. For these reasons, the studies of comets will continue, also with the new instruments that will be activated in the coming years. 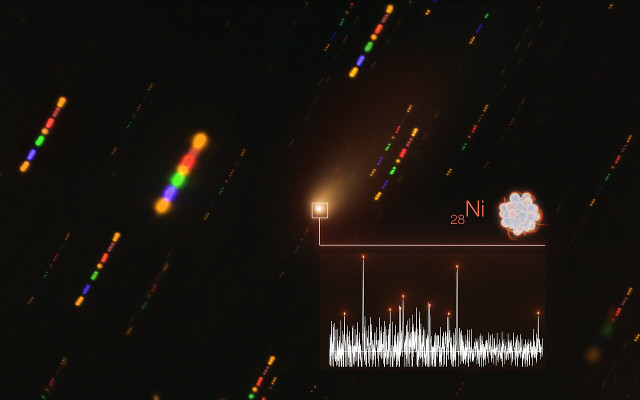 Previous Post: New confirmations that sub-Neptune planets can transform into super-Earths
Next Post: The origin of eight fast radio bursts has been located