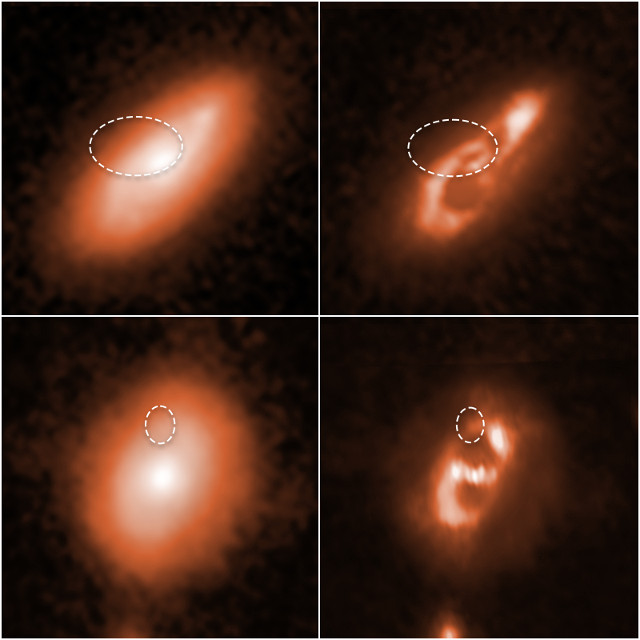 An article (link to the file in PDF format) to be published in “The Astrophysical Journal” reports the location of the origin of eight fast radio bursts (FRBs) detected between 2017 and 2020. A team of researchers coordinated by the University of California at Santa Cruz used the Hubble Space Telescope to accomplish this task by applying a method already used to pinpoint the origin of other cosmic phenomena such as supernovae and gamma-ray bursts. This result offers new information on an extremely energetic phenomenon such as fast radio bursts, which emit an amount of energy in a millisecond comparable to the amount the Sun emits in a year. The results of this study are compatible with the theory that links them to magnetars.

Of the thousands of fast radio bursts detected since the discovery of this cosmic phenomenon in 2001, only about fifteen of them have been pinpointed to their galaxy of origin. For this reason, the mapping conducted using the Hubble Space Telescope is important and the result was the location of the origin of eight fast radio bursts of which five came from areas near or on a galaxy’s spiral arms. These are galaxies that are several billion years old and we see them the way they were when they were young, when star formation within them was still active.

The researchers used the various detection possibilities of the Hubble Space Telescope to locate the areas of origin of eight fast radio bursts: the oldest one dates back to 2017 while the other seven were detected in 2019 and 2020. The ultraviolet detections allowed to trace the brightness of young stars along the arms of spiral galaxies. The near infrared detections made it possible to calculate the mass of the galaxies examined and to find the areas that hosted populations of ancient stars.

The image (science: NASA, ESA, Alexandra Mannings (UC Santa Cruz), Wen-fai Fong (Northwestern). Image processing: Alyssa Pagan (STScI)) shows two galaxies where the origins of fast radio bursts cataloged as FRB 190714 (top) and FRB 180924 (bottom) was located. The areas of the bursts are marked with dotted ovals. To achieve their detection, computer-generated images showing the light of galaxies (on the left) were superimposed on Hubble’s images to obtain sharper views (on the right).

The analysis of the images obtained with the Hubble Space Telescope helped to rule out some possible sources for fast radio bursts linked to the youngest and most massive stars. These stars explode into supernovae which instead emit gamma-ray bursts. Other types of supernovae and neutron star mergers have also been marked as unlikely.

The results are compatible with the theory that currently seems the most likely, which sees fast radio bursts originating from magnetars, neutron stars with extremely powerful magnetic fields. Identifying the source of these bursts is essential to verify this theory and understand if very powerful flares on magnetars can emit those bursts.

This study offers interesting results for pinpointing the origin of fast radio bursts but it’s only the beginning. The researchers warn that more observations are needed to improve burst detection. This is another type of research for which the James Webb Space Telescope will be very useful.

Previous Post: Traces of iron and nickel found in the atmospheres of comets far from the Sun
Next Post: 36 dwarf galaxies show simultaneous growth in star formation