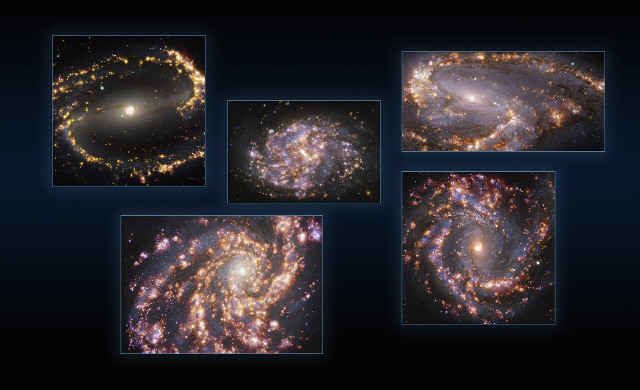 Using the MUSE (Multi-Unit Spectroscopic Explorer) instrument on ESO’s VLT (Very Large Telescope), the PHANGS (Physics at High Angular Resolution in Nearby GalaxieS) project conducted the PHANGS-MUSE investigation obtaining images of galaxies with different components in distinct colors, so as to allow astronomers to identify stellar nurseries with young stars and the gas clouds surrounding them. The image (ESO/PHANGS) shows the galaxies NGC 1300, and NGC 1087, NGC 3627 (top), NGC 4254 and NGC 4303 (bottom).

ESO astronomer Eric Emsellem, who led the observations conducted with the VLT within the PHANGS project, explained that for the first time astronomers have been able to resolve individual star-forming units across a wide range of locations and environments in a sample that well represents the different types of galaxies. He added that it’s possible to directly observe the gas that gives birth to the stars, the young stars, and to witness their evolution through various phases.

A little over a month ago, the PHANGS-ALMA survey was presented with the mapping of about 100,000 stellar nurseries in 90 galaxies in the nearby universe thanks to the ALMA radio telescope. The observation of the same galaxies with different instruments within the PHANGS project allows combining data obtained in different bands of the electromagnetic spectrum at visible, near infrared, and radio frequencies. This offers much more complete images of the observed galaxies and above all to provide more information on star formation areas. This is all useful information to understand under what conditions stars form.

The mapping conducted with the ALMA radio telescope already allowed to note that not all star nurseries are the same and that local conditions influence star formation processes. The addition of the maps created with the MUSE instrument will help to better understand the similarities and differences between star nurseries. The observations conducted with the Hubble Space Telescope will complete this cosmic picture.

The final maps will have an amount of detail never seen before and yet there will still be room for improvement. Astronomer Eva Schinnerer of the Max Planck Institute for Astronomy (MPIA), principal investigator of the PHANGS collaboration, explained that the resolution produced for the maps is just enough to identify and separate individual star-forming clouds, but it’s not enough to see inside them. PHANGS researchers are pushing the boundaries of research, as are other scientists engaged in other projects.

This type of research provides results that can be used for many years and yet represents one of many steps forward for astronomy. New instruments will allow for even more detailed observations and new answers regarding star formation processes and other cosmic mysteries.

Previous Post: A flare observed from the supermassive black hole at the center of the Milky Way
Next Post: Activity detected from the giant Comet C/2014 UN271 (Bernardinelli-Bernstein)