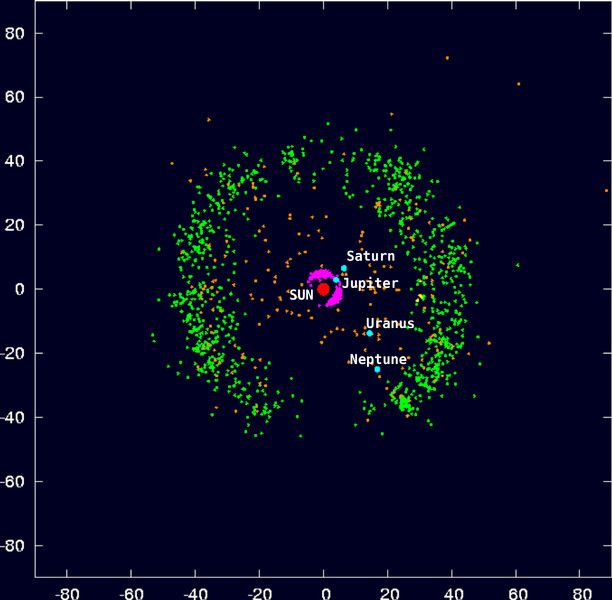 An article published in “The Planetary Science Journal” reports a study on some Kuiper Belt Objects (KBOs) that are part of a particular group of which new observations revealed a blue color and a binary nature. A team of researchers used observations ran by the Col-OSSOS team which obtained color measurements of 98 Kuiper Belt Objects while also offering new insights into the subgroup of objects called cold classical Kuiper Belt Objects. Their conclusion is that the blue binary objects were pushed into that area by Neptune as it moved away from the Sun.

The Kuiper Belt (image with the KBOs in green ©WilyD) is an area of ​​the solar system still little known because it’s located beyond the planet Neptune’s orbit and conventionally ends at a distance from the Sun equal to 50 times the Earth’s. That’s a very distant area where some dwarf planets have been discovered only in the last few decades and occasionally some other potential dwarf planet or asteroid is discovered that big and reflecting enough to be detected by telescopes.

Astronomers are interested in Kuiper Belt Objects also when it comes to asteroids because they believe they’re relics from the formation of the solar system. They have sometimes been referred to as fossils that still retain their original characteristics and therefore their study is helpful in understanding the early stages of that history.

Understanding which of the KBOs formed in the area in which they orbit today and which ones instead were pushed there by gravitational interactions such as Neptune’s is useful in studies on the origin of the solar system. Among the asteroids believed to be native to the area where they were sighted today are those called cold classical Kuiper Belt Objects (CCKBOs). This study suggests that some of those asteroids were pushed into that area.

The Col-OSSOS (Colors of the Outer Solar System Origins Survey) used the Gemini Nord telescope and the Canada-France-Hawaii Telescope between 2013 and 2017 to obtain photometric information with unprecedented precision on nearly 100 trans-Neptunian objects, which means in the Kuiper belt. The information at optical and near-infrared frequencies allowed among other things to identify some asteroids with a blue color, an anomaly considering that the composition of those objects generally makes them reddish. Often those objects are binary but in the blue subgroup’s case, all were found to be in pairs.

By analyzing the data of these blue asteroids, also using simulations and statistical tools, the researchers concluded that they were pushed into the area where they orbit today by Neptune. This study crosses with that of the migration of planets, which indicates that Neptune formed closer to the Sun and then moved outwards. This shift caused gravitational interactions with nearby asteroids and at least some of them were pushed into the Kuiper Belt.

According to the researchers, further studies of these blue objects will help reconstruct Neptune’s movements after its formation. It’s a type of study that shows how the various objects in the solar system, even if distant from each other, are linked by a common history that sometimes meant direct influence.

Previous Post: A study of the effects of a protostellar jet in the Orion Nebula
Next Post: The first samples of Martian rock examined by the Mars Rover Perseverance suggest a presence of water for millions of years