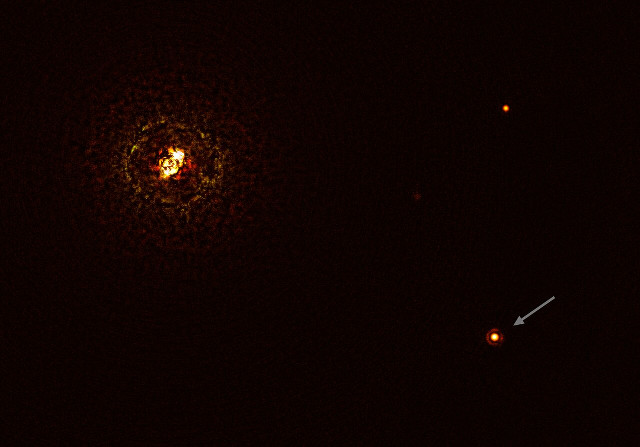 An article published in the journal “Nature” reports the discovery of a planet in the binary system b Centauri, the most massive in which a planet has been discovered. A team of researchers used ESO’s VLT in Chile to locate the exoplanet cataloged as b Centauri (AB)b or simply b Centauri b photographing it with the SPHERE instrument. It’s a record-breaking planet also because it has a mass estimated at about ten times Jupiter’s, making it one of the most massive known planets, with an orbit that is about one hundred times farther from the two stars than Jupiter’s distance from the Sun. The researchers think that b Centauri b likely formed in another area of its system and then moved due to gravitational interactions.

Many astronomers think that giant stars can’t have planets because they generate extreme environments. In particular, their very powerful and intense emissions are destructive to the surrounding environment. Volatile compounds are kept in a gaseous state by those emissions, destabilizing the processes of planetary formation in the circumstellar disk that exists during the star formation process.

A pair of massive stars with a combined mass between 6 and 10 times the Sun’s should generate a truly destructive environment, yet the Centauri b pair is home to at least one planet. After this study, it becomes, not surprisingly, the most massive known system to host a planet. 325 light-years away from Earth, it’s visible to the naked eye thanks to the two stars’ brightness.

The b Centauri pair was studied with the VLT (Very Large Telescope), which made it possible to discover a circumbinary-type planet, which means it orbits both stars, cataloged as b Centauri A and b Centauri B. For this reason, the planet was cataloged as b Centauri (AB)b or simply as b Centauri b. The planet was photographed directly by the SPHERE (Spectro-Polarimetric High-contrast Exoplanet REsearch) instrument, activated in June 2014 mainly for this type of study. The image (ESO/Janson et al.) shows one of those photos with b Centauri b indicated by the arrow together with its stars on the left side and another star in the background at the top right.

The exoplanet b Centauri b has gigantic features worthy of its stars. Its mass was estimated to be around ten times the planet Jupiter’s, making it one of the most massive known so far. Its orbit is the most extraordinary, about 100 times farther from its stars than Jupiter from the Sun and therefore about 560 times the distance of the Earth from the Sun.

Actually, ESO 3.6-metre telescope in La Silla, Chile, had already detected the presence of the planet b Centauri b over twenty years ago but its nature wasn’t recognized. Only today, after the observations that made it possible to distinguish it from the stars through various images captured at different times, it was possible to understand that there was an exoplanet in those old images. That’s part of the great advances that have been made in the search for exoplanets.

Astronomer Markus Janson of Stockholm University, Sweden, stated that the discovery of planet b Centauri b was very exciting because it changes our picture of massive stars as planet hosts. It’s possible that b Centauri b survived due to its distance from its stars and their intense emissions. It probably formed in another area of ​​that system and then moved as a result of gravitational interactions. Surely it will be studied again to better understand its characteristics and how it could have formed and evolved in that hostile environment.

Previous Post: A success for the launch of the IXPE space telescope
Next Post: An object on the border between planet and brown dwarf discovered in the cosmic neighborhood