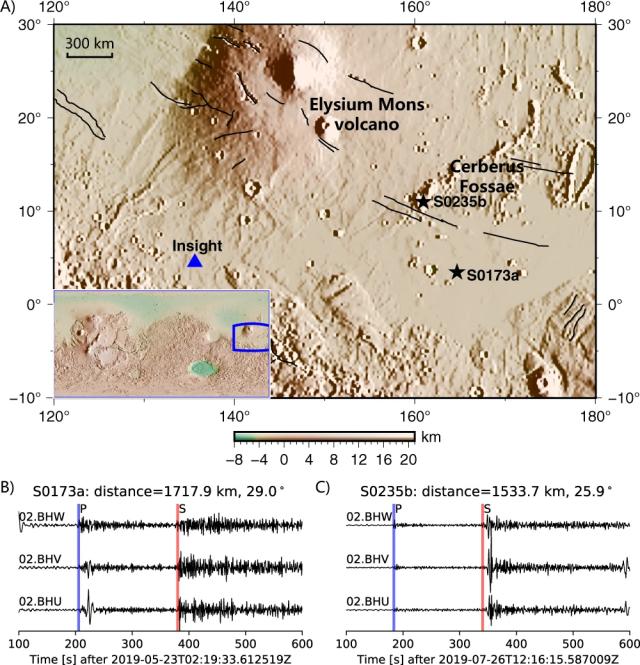 An article published in the journal “Nature Communications” reports a study that offers evidence that the marsquakes detected by NASA’s InSight lander are caused by the activity of underground volcanic magma. Doctor Weijia Sun of the Chinese Academy of Sciences and Professor Hrvoje Tkalčić of the Australian National University examined data collected by InSight identifying 47 underground marsquakes in the Cerberus Fossae region of Mars over the course of 350 Martian days. According to the two researchers, the Martian mantle is still active and the marsquakes are of volcanic origin and not tectonic, as the scientists who studied Mars believed.

After landing on the planet Mars on November 26, 2018, the InSight lander started its geological surveys, which are crucial to improving our understanding of the red planet’s structure. Volcanic activity is well known but is generally considered a phenomenon linked to past eras when Mars was young. Instead, some tectonic activity is believed to still exist. Now, an analysis of the data collected by InSight offers a different conclusion.

Previous studies of data collected by the InSight lander’s seismometer had identified the signals of 9 marsquakes. However, the quality of the Martian seismic signals was found to be low, making that identification difficult. Weijia Sun and Hrvoje Tkalčić applied a filter to the signals based on the characteristics of the 9 marsquakes, obtaining the discovery of 47 more events that occurred over 350 Martian days, equivalent to about 359 Earth days. Those marsquakes had a small magnitude and would barely be felt on Earth. However, they could be important in improving our understanding of the interior of Mars.

The image (Courtesy Sun & Tkalčić. All rights reserved) shows the landing point of the InSight lander marked with the blue triangle, stars marking the locations of the two major marsquakes identified. The lower left inset shows a larger topographical map of Mars with the blue rectangle indicating the region in the center of the study.

The marsquakes identified by the two researchers occurred in the Cerberus Fossae region, believed to be active from a tectonic point of view but not volcanic. Marsquakes occurred at any time of the Martian day while the ones previously identified occurred in the middle of the night when the planet is at its quietest. That led to the conclusion that marsquakes are caused by the movement of molten rock in the Martian mantle.

Volcanic activity, even if only underground with movements of magma, would change the idea that planetary scientists have of Mars. Magmatic fluxes may indicate that convection is occurring inside Mars, and that means that in theory, the planet could have a magnetic field. We know that today Mars doesn’t have a magnetic field but if the conclusions of this study are correct the reason must be another.

Our current knowledge of Mars indicates that its core might have remained liquid for only a few hundred million years during which time it could generate a magnetic field that acted as a shield against solar emissions. The red planet was much more similar to Earth at the time but without a magnetic field, its atmosphere started getting stripped away into space by solar emissions causing the environmental collapse that transformed Mars into today’s desert.

On Earth, the magnetic field is a shield that has protected life forms that were born and developed on the planet. On Mars, perhaps at the beginning of its history life forms were born but conditions drastically changed. There’s also a problem for humans who could one day land on Mars, all the more so if there’s a project to create a colony there. Studies of marsquakes offer useful information in so many ways and for this reason, they will continue.

Previous Post: A chaotic planetary formation in the system of the very young star AB Aurigae
Next Post: The SpaceX Crew Dragon Endeavor spacecraft blasted off for its Ax-1 private mission