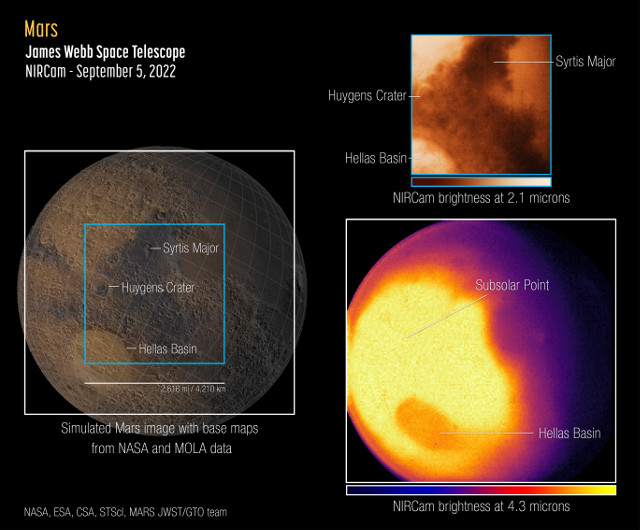 The first images of Mars captured by the James Webb Space Telescope on September 5, 2022, offer views of the planet at different infrared wavelengths and some spectroscopies. Webb is in a position where it can see part of the sunlit side of Mars and can provide images and spectra to help complete the detections of space probes, rovers, and other telescopes. The red planet is very close and very bright compared to the normal targets of Webb’s observations, so the exposures used were very short to avoid causing problems to the instruments.

Launched on December 25, 2021, the James Webb Space Telescope has primary targets far away, even at the boundaries of the universe. However, especially in the early stages of its scientific mission, it’s important to verify its possibilities with objects in the solar system as well, in this case, the planet Mars.

The top image (NASA, ESA, CSA, STScI, Mars JWST/GTO team) shows Mars seen on the left in a NASA image based on data from the Mars Orbiter Laser Altimeter (MOLA) and on the right by the Webb Space Telescope’s Near-Infrared Camera instrument (NIRCam) at two different infrared wavelengths.

The image captured at 2.1 microns is dominated by reflected sunlight and consequently is similar to the one on the left, captured in visible light. Some geological features indicated in both images are also visible to Webb.

The image captured at 4.3 microns shows thermal emissions, which are those emitted by the planet in its heat loss. This is a brightness related to the surface and atmosphere’s temperature. The huge crater of Hellas Basin, or Hellas Planitia, appears darker because its altitude is lower than that of the surrounding surface and this means that the atmospheric pressure is higher and causes greater suppression of thermal emissions. In essence, that image shows different effects that need to be kept in mind in its study.

The spectrum captured by the Near-Infrared Spectrograph (NIRSpec) instrument is shown in the bottom image (NASA, ESA, CSA, STScI, Mars JWST/GTO team). It has six different high-resolution spectroscopy modes that were all used. The result shows the traces left in the infrared emissions of water and especially of carbon dioxide at different wavelengths.

The light absorption by various molecules provides information on dust, clouds, and geological features on the ground. By repeating the observations over time, it’s possible to evaluate changes, even locally, in the atmosphere. There’s also hope that Webb’s sensitivity will allow it to detect gases present in small quantities such as methane, whose origin on Mars is still a mystery.

For these reasons, it may be useful to conduct spectroscopic examinations of Mars with instruments such as the Webb Space Telescope despite the presence of space probes orbiting the planet and landers and rovers on the ground. Different instruments offer data of different types which consequently can complement each other.

Like other observations conducted in this first phase of the James Webb Space Telescope’s scientific mission, the data collected is still being analyzed. The images arrive quickly but the scientific articles written thanks to them require a lot of work, so they will arrive in the coming months. 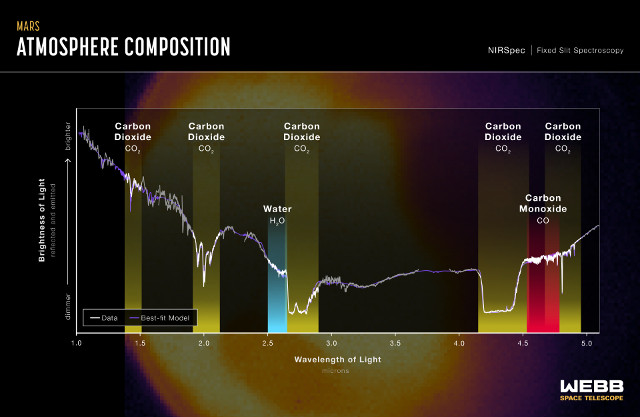