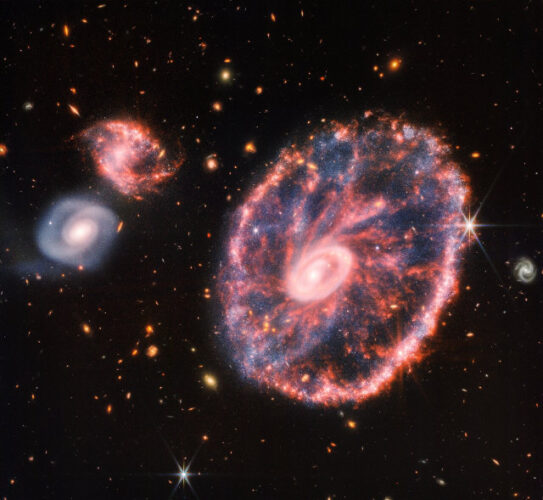 An image captured by the James Webb Space Telescope shows the Cartwheel galaxy in greater detail than those obtained in the past with other telescopes. A combination of Webb’s NIRCam and MIR instruments allowed the identification of individual stars and star-forming regions while also offering new insights into the behavior of the supermassive black hole within this peculiar galaxy. This is a new help in the study of the changes taking place in what is most likely the consequence of a collision between two different galaxies with a transformation still taking place. 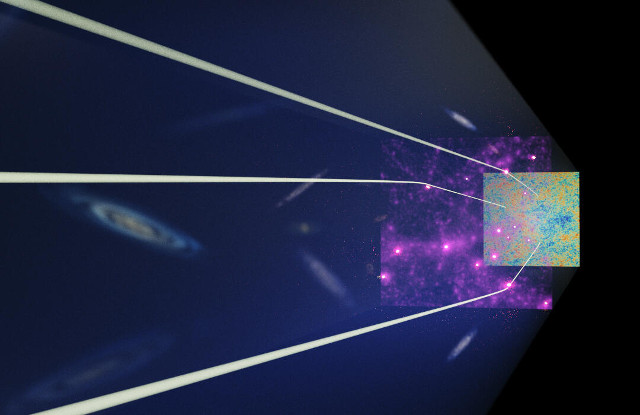 An article published in the journal “Physical Review Letters” reports the results of an analysis of dark matter distribution around 1.5 million primordial galaxies. A team of researchers led by Hironao Miyatake of the Japanese University of Nagoya used observations conducted with the Subaru telescope and analyzed data collected by the Planck Surveyor space probe to detect distortion of the cosmic microwave background (CMB).

The results of this study show fluctuations in dark matter distribution in the early universe that led to inhomogeneity in the aggregation of ordinary matter that formed galaxies. That aggregation is lower than predicted by the Lambda-CDM model, the one that currently best describes the observations. The uncertainty lies in the difficulty of obtaining precise results in examining very distant galaxies. 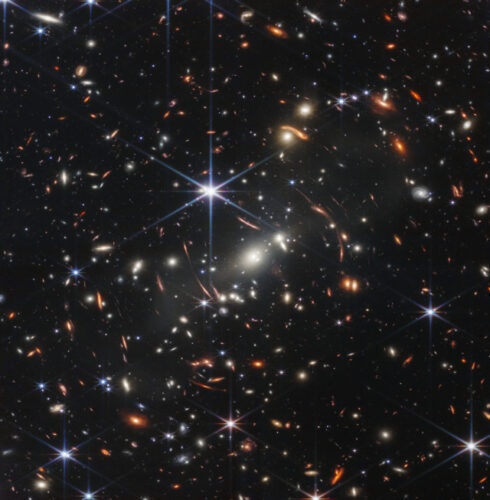 NASA has released the first official images captured by the James Webb Space Telescope. The presentation was made in collaboration with ESA and CSA (Canadian Space Agency), the other space agencies that work together with NASA on the project and its management. Yesterday, when it was afternoon at the White House, US President Joe Biden personally presented the top image, Webb’s First Deep Field image that includes the SMACS 0723 galaxy cluster as a preview, a proof of the importance of this space telescope. 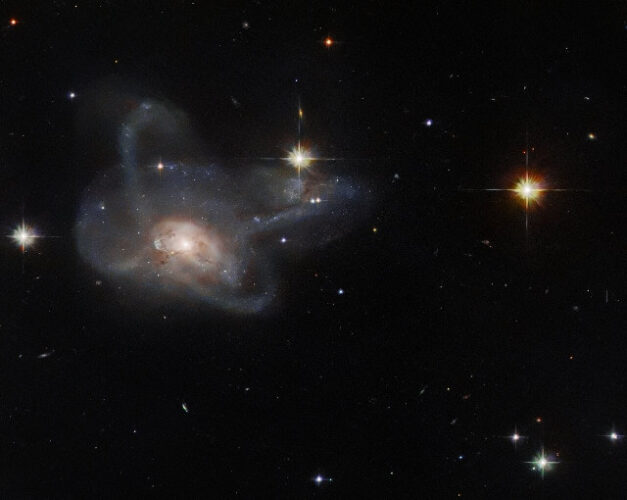 An image captured by the Hubble Space Telescope shows the galaxy CGCG 396-2, out of the ordinary thanks to its many arms. It’s a galaxy that has become an object of interest by the Galaxy Zoo project, one of the astronomical projects that involve the public, in this case, to classify galaxies observed by various telescopes. CGCG 396-2 was selected for follow-up observations with Hubble, whose ACS instrument made it possible to examine the arms that have an unusual configuration because there’s a galaxy merger taking place and consequently an unusual shape that is changing over time. 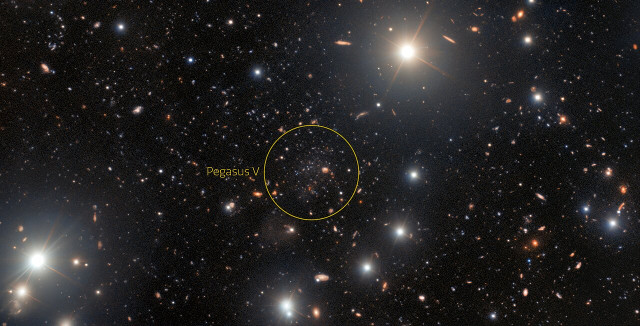 An article submitted for publication in the journal “Monthly Notices of the Royal Astronomical Society” reports the identification of an ultra-faint dwarf galaxy that was named Pegasus V near the Andromeda galaxy. A team of researchers conducted follow-up observations following the discovery made by an amateur astronomer and, using the GMOS instrument mounted on the Gemini North telescope in Hawaii, confirmed its existence. An interesting result of the observations is the very limited presence of elements heavier than hydrogen and helium, a discovery that led to the conclusion that it’s a kind of fossil of a primordial galaxy.