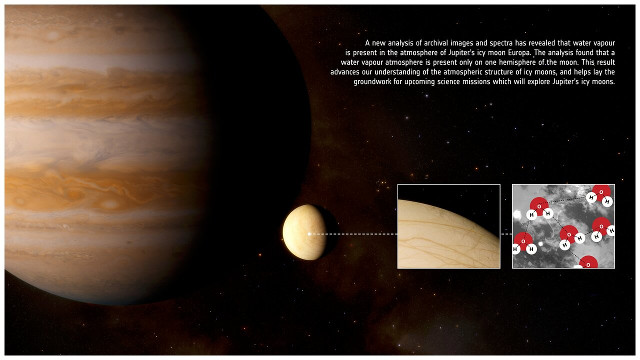 An article published in the journal “Geophysical Research Letters” reports the detection of a stable presence of water vapor in the atmosphere of Jupiter’s moon Europa. Lorenz Roth of the Kth Royal Institute of Technology in Stockholm, Sweden, used ultraviolet observations conducted with the Hubble Space Telescope between 1999 and 2015 to infer the presence of water vapor. Its presence appears to be persistent only in one hemisphere of Europa, the one opposite the moon’s direction of motion in its orbit.

An article published in “The Astrophysical Journal Letters” reports a study on the circumplanetary disk around the exoplanet PDS 70 c. A team of researchers led by Myriam Benisty used the ALMA radio telescope to study what is still a protoplanet and the disk of materials around it that could form moons. According to estimates, there’s enough mass to form up to three moons the size of the Earth’s Moon. This type of study offers new information both on the formation of planets, especially gas giants, and on moons, one of the frontiers astronomers are trying to open. 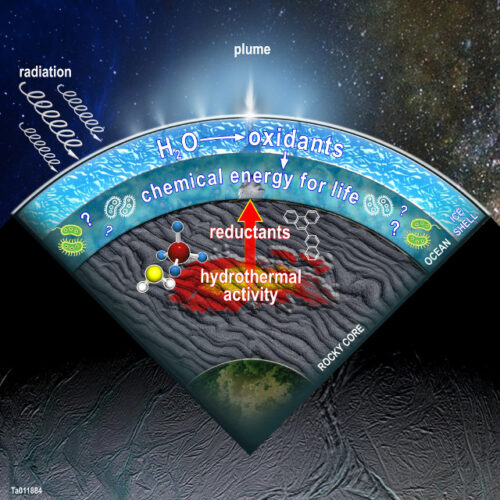 An article published in the journal “Icarus” reports a study on the conditions under the surface of Saturn’s moon Enceladus, which indicate possible chemical processes that could support the metabolism of life forms. A team of researchers used data collected by the Cassini space probe to create a model of the chemical processes taking place in the Enceladus’ underground ocean, and concluded that there are possible redox chemical reactions that can fuel the metabolism of life forms. 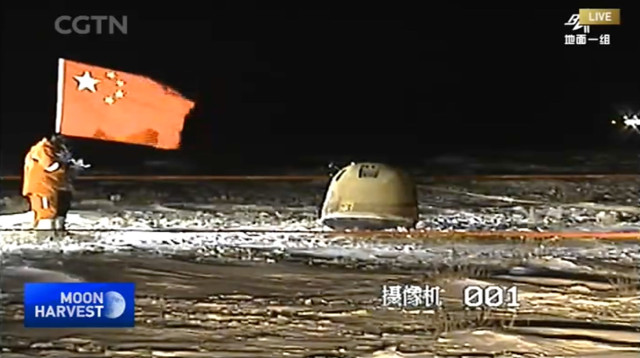 It was night in China when the capsule carrying the Moon samples taken during the Chang’e-5 mission landed in the Siziwang Banner, meaning an autonomous county of Inner Mongolia. The lander with the return module landed on the Moon on December 1, spent about two days collecting samples, and the return module took off to transport the samples to orbit and start the voyage back to Earth. Recovery personnel found the capsule, which will be transported to a laboratory in Beijing, where operations will begin to open it without contaminating its contents. 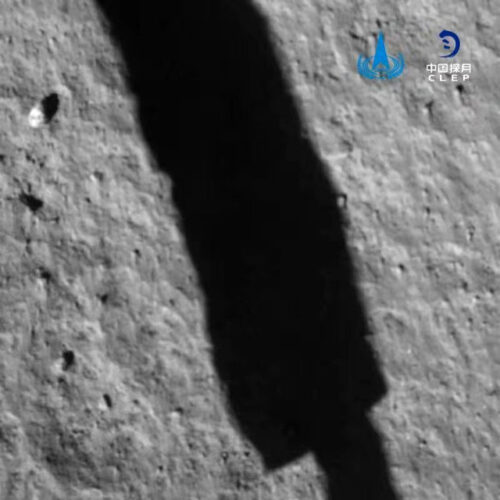 It was night in China when the lander and ascent vehicle of the Chinese Chang’e-5 mission successfully completed their Moon landing maneuvers. The various modules that make up Chang’e-5 were launched when it was November 24 in China and reached the Moon’s orbit in recent days. At that point, a series of maneuvers begun to make its orbit circular, the modules that were scheduled to land separated, and everything went well. Very soon, the lander was scheduled to begin its excavation work to collect soil and subsoil samples that will be sent into orbit to be returned to Earth around mid-December.