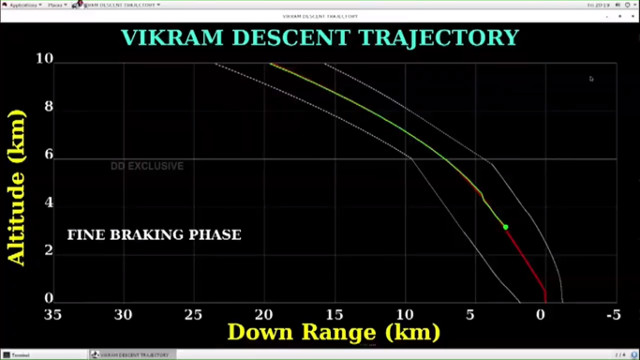 The Indian Chandrayaan 2 mission’s Vikram lander and the Pragyan rover, launched on 22 July, attempted a Moon landing but something went wrong and the contact was lost at an altitude of about 2.1 kilometers. The Indian space agency ISRO’s engineers are analyzing the data collected, but probably there was some problem during the braking phase with loss of attitude and subsequent crash of the vehicles.

The attempted Moon landing represented the final phase of a long series of maneuvers that on August 20 brought the vehicles into the Moon’s orbit and after the separation of the Vikram lander and the Pragyan rover from the orbiter, which will continue its mission flying over the Moon, between September 3 and 4 lowered their orbit bringing them closer to the Moon’s surface.

After the landing near the Moon’s south pole, the small rover Pragyan was supposed to separate quickly from the Vikram lander having a limited time of a Moon day, equal to about 14 Earth days, to carry out their tasks. The rover was supposed to explore the area, collect minerals to be examined with its instruments and make observations of what could be among the oldest craters in the solar system: Manzini C and Simpelius N.

Making the Vikram lander and the Pragyan rover able to survive the lunar night would have made their design considerably more expensive and complex. However, the Indian space agency ISRO wanted to try to reactivate them at the next sunrise but probably the strong drop in temperature during the night would have damaged some crucial electronic component.

The landing maneuvers seemed to go well but in the last phase the trajectory of Vikram and Pragyan started deviating from the optimal one. In the top image (courtesy ISRO) the ideal trajectory is indicated in red while the real one is indicated in green. Perhaps the retrorocket system had some problems that ended up causing a loss of attitude for Vikram with consequent loss of contacts and subsequent crash on the Moon’s surface.

The continuing lack of contacts seemed immediately a very negative sign but attempts to restore communications continued at the mission control center. The Indian Prime Minister Narendra Modi, present at the event, spent some time talking to the students who were also present for the occasion and before leaving had words of encouragement and esteem for the ISRO’s staff.

The Chandrayaan 2 mission continues with its orbiter, which began its work. Of course, working on the ground would have been something different, especially for finding water. India confirmed its ability to put probes into orbit around other celestial bodies but landing is far from easy.

Previous Post: Life’s building blocks can be formed from free radicals generated in space
Next Post: The Russian Soyuz MS-14 spacecraft has come back to Earth