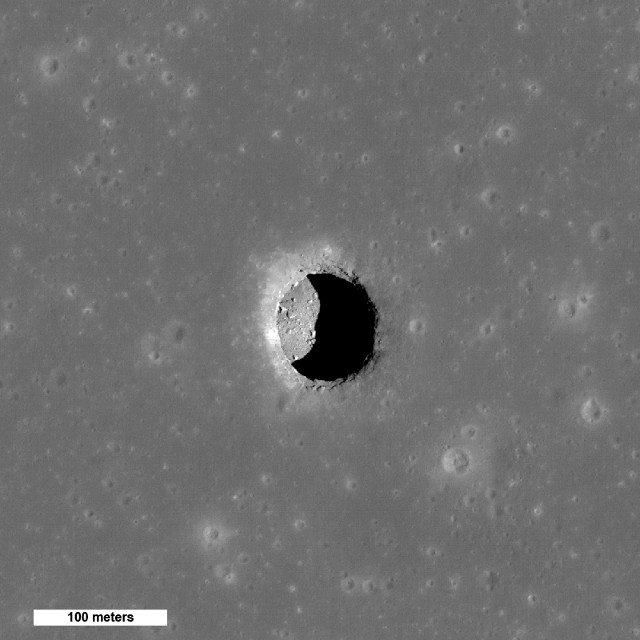 An article published in the journal “Geophysical Research Letters” reports a study on some lunar pits where temperatures are stable at around 17° Celsius (about 290 Kelvin). A team of researchers led by UCLA’s Tyler Horvath used detections conducted with NASA’s Lunar Reconnaissance Orbiter (LRO) space probe’s Diviner Lunar Radiometer Experiment, or simply Diviner, instrument and computer simulations to assess the conditions that exist in particular in lunar pits. The discoveries are interesting in the search for the best places on the Moon to build human habitats.

Lunar pits were discovered in 2009 by the Japanese space probe SELENE, also known by the nickname Kaguya, which orbited the Moon between October 2007 and June 2009. Lunar pits were immediately considered interesting in the study of possible human colonies on the Moon because they can protect their possible inhabitants from cosmic rays, solar radiation, and smaller meteorites. Their study became more important after the start of new plans to bring humans back to the Moon with colonization projects.

About 200 lunar pits have been identified and 16 of them were likely generated by the collapse of lava tubes, another geological formation studied for its potential to host colonies on the Moon and Mars. Lava tubes exist on Earth as well and are formed as a result of volcanic activity when molten lava flows under already cooled lava or when a crust forms over a river of lava that leaves a tunnel behind. If a lava tube collapses, it opens a pit that can lead into the rest of the tunnel.

The LRO space probe has been examining the Moon from its orbit since June 2009, also with thermal readings using the Diviner instrument. Examination of the data shows that there are lunar pits where at night temperatures are much higher than those of the surface. The authors of this study focused on pits in the Mare Tranquillitatis and in the Mare Ingenii.

The results of the examinations of the data collected are significant because on the lunar surface, temperatures vary from 127° Celsius during the day to -173° Celsius at night but in the lunar pits they’re much more stable. The researchers created computer simulations to analyze the thermal properties of Moon rocks and dust to map the pits’ temperatures over time. In the permanent shade that exists in the pits, the temperature fluctuates slightly around 17° Celsius.

From the thermal point of view, lunar pits are excellent for creating habitats for humans. Thermal stability is a further benefit that adds to the protection that pits offer against cosmic rays, solar radiation, and the smaller meteorites that often hit the surface because the lunar atmosphere is too thin to stop them. Lunar colony projects are long-term but at least some places with suitable characteristics appear to have been found.