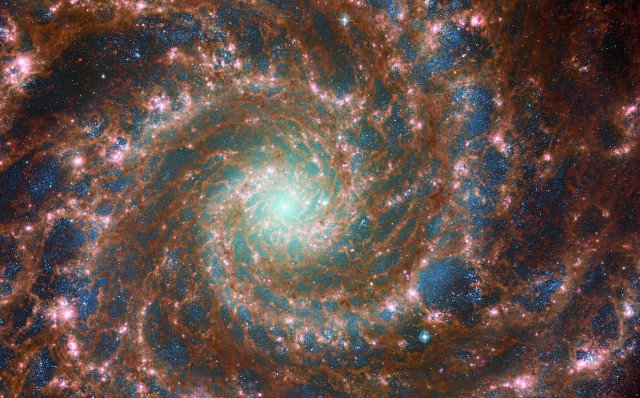 ESA has published images of the galaxy M74, nicknamed the Phantom Galaxy, captured by the Hubble and James Webb space telescopes with the addition of a combination between them. It’s a synergy that takes advantage of Hubble’s sensitivity to optical frequencies and Webb’s sensitivity to infrared frequencies. This allows to appreciate different details of a spiral galaxy that is practically visible face-on from the Earth and therefore an excellent object of study. Combining observations obtained with instruments that work in different electromagnetic bands is important Webb starts showing the great results it can offer in this type of study as well.

Launched on December 25, 2021, the James Webb Space Telescope showed right from the first observation tests that it can really offer great results. However, this doesn’t mean that all the studies for which it will be used will be based on its observations only. Another misconception is that it replaced Hubble, which instead is still in service and offers excellent results.

The James Webb Space Telescope was designed to take a leap forward in infrared astronomy and in that electromagnetic band is superior to Hubble. However, in the optical frequencies, Hubble still offers great results, so a combination of observations of these two instruments in the two bands can offer more details of the study target.

Galaxy M74, also known as NGC 628 and nicknamed the Phantom Galaxy, is an interesting subject of study. About 32 million light-years from Earth, it’s relatively close, and being face-on allows to appreciate its well-defined and prominent spiral arms, which make it a grand design spiral galaxy.

The James Webb Space Telescope’s MIRI (Mid-InfraRed Instrument) made it possible to capture an infrared image created using four different filters. Webb allowed observing delicate filaments of gas and dust in the spiral arms and the star cluster at the center of the galaxy M74.

The combination of the results obtained with the two space telescopes offers greater details about the various parts of the galaxy M74. This allows for a better study of the star formation taking place within it and to measure more precisely the mass and age of the existing star clusters.

Without the Space Shuttles that allowed the Hubble Space Telescope’s repair and upgrade missions, a failure could doom an instrument that marked the history of astronomy but we can hope that it will still work for years. In short, far from replacing it, at least for now, the James Webb space telescope can complement it to improve studies of galaxies and other objects. 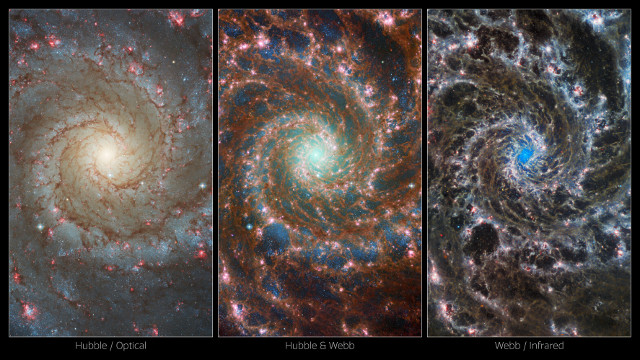 Previous Post: The exoplanet TOI-1452 b could be an ocean planet
Next Post: A galaxy merger observed that generated a quenching galaxy with a tidal tail