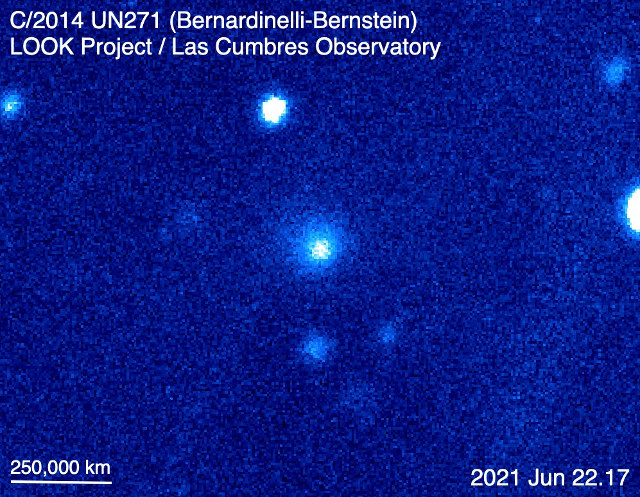 On June 19 came the announcement of the discovery of the object that initially looked like an asteroid in the examination of 2014 images from the Dark Energy Survey by astronomers Pedro Bernardinelli and Gary Bernstein. At the time, the object was almost as far away as Neptune’s orbit and no signs of cometary activity were detected, so its diameter was estimated to be between 100 and 200 kilometers.

The object was originally designated 2014 UN271 and became the target of various observations. The Las Cumbres Observatory runs a network of robotic telescopes around the world and this greatly helps astronomical research, in this case of the newly identified object.

The Las Cumbres Observatory telescope located at the South African Astronomical Observatory captured images of the object, and members of the LOOK (Las Cumbres Observatory Outbursting Objects Key) project from New Zealand were among the first to notice the comet. In fact, the new images highlighted a coma, typical of comets. That led to the update of its official designation to C/2014 UN271. The image (Courtesy LOOK/LCO. All rights reserved) shows the comet surrounded by a diffuse cloud formed by the coma.

Comet activity at a distance from the Sun that is more than twice Saturn’s is intriguing and surprising even though studies have recently been proposed that show this possibility. C/2014 UN271 doesn’t show traces of a tail but there’s a coma and this must be taken into account when estimating the size of its nucleus. It could still be the largest comet identified so far but more observations that can evaluate the extension of the coma are needed to understand how close its diameter really is to the original estimates.

Another intriguing possibility is that comet C/2014 UN271 comes from the Oort cloud, the outermost area of ​​the solar system, so far from Earth that its existence is still theoretical because even the most powerful telescopes can’t detect a comet in that area. Ascertaining the origins of C/2014 UN271 would also help to better understand some parts of the solar system’s history, also concerning the migrations of the planets and their influence on comets. These are all reasons why many astronomers will study C/2014 UN271 for years.