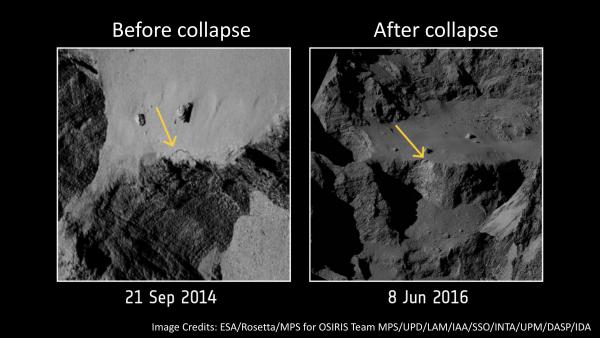 An article published in the journal “Icarus” describes a research focused on the link between landslides and avalanches with the long-term activity of the comet 67P/Churyumov-Gerasimenko. Jordan K. Steckloff and Nalin H. Samarasinha of the Planetary Science Institute examined data collected by ESA’s Rosetta space probe in the course of its mission to conclude that those phenomena occurring on the surface of the comet, with the resulting waste of mass, are a key to keeping it active in the long term.

The Rosetta mission ended on September 30, 2016 with the impact of the space probe on the surface of the comet 67P/Churyumov-Gerasimenko. The analysis of the wealth of data collected up to the last moment went on to try to understand the mechanisms underway during the period of activity, when the comet passes at a distance from the Sun close enough to trigger the sublimation of volatile compounds.

Among the many articles published, there’s one in March 2017 on “Nature Astronomy” concerning materials breaking away from the rocky cliff called Aswan in the Seth region of the comet’s nucleus and already offered some insight into the forces behind those events. Now this new research develops that topic still focusing on Aswan with landslides and avalanches that caused a mass waste in comet 67P/Churyumov-Gerasimenko. The image (ESA/Rosetta/MPS for OSIRIS Team MPS/UPD/LAM/IAA/SSO/INTA/UPM/DASP/IDA) shows an example of collapse of a piece of cliff at Aswan.

The emissions of gas in a comet’s period of activity can be favored by landslides and avalanches because they expose the ice buried beneath the surface, which gets exposed to the Sun and start sublimating as well. The problem is that over time the waste of mass end up causing a leveling of the surface with the consequence that landslides and avalanches decrease therefore the cometary activity should decrease. So far it wasn’t clear how that activity could continue but Jordan K. Steckloff and Nalin H. Samarasinha independently developed models to solve the problem.

The two scientists tackled the problem from two completely different perspectives. Nalin H. Samarasinha’s model is based on observations made from the Earth of comets’ light curves and gases’ rhythms of sublimation. Jordan K. Steckloff’s model considers how the gases push on the surface of the comet when they escape from it, taking into account the effects of a comet’s activity, shape and topography. However, the two models must provide consistent results to accurately describe the same phenomenon.

Comparing the results of their models, the two scientists found out that they matched only if the forces linked to sublimation originated from steep ridges where mass waste occurs, just like that of Aswan. In those cases the orientation of the jets is far from being perpendicular and can influence the comet’s rotation. This suggested that events such as landslides and avalanches could be critical to maintaining cometary activity.

The forces linked to sublimation and any other force that can alter a comet’s rotation can start mass waste events in which the exposed ice can sublimate reactivating a comet that’s dormant or with little activity. The two scientists proposed a new classification scheme based on the frequency of that type of process: quasi-equilibrium, episodic, quasi-dormant and extinct.

This research is based in particular on the data of comet 67P/Churyumov-Gerasimenko but the two authors considered other comets as well. For example, they think that the processes taken into consideration could explain the prolonged activity of the comet 2P/Encke, whose orbit changed over time allowing to expose new ice to sublimate.

The relationship between a comet’s rotation and its activity is crucial in this research. In turn, comets and their activities are important in the history of the solar system in various ways, as building blocks for planet formation, for the water they may have brought to Earth, and for the organic molecules that may have also brought to Earth. These are the underlying reasons that bring so much interest in comets.

Previous Post: The binary asteroids Patroclus and Menoetius as evidence of the shifting of the solar system’s gaseous planets
Next Post: A new view of the Abell 370 galaxy cluster offered by the BUFFALO program