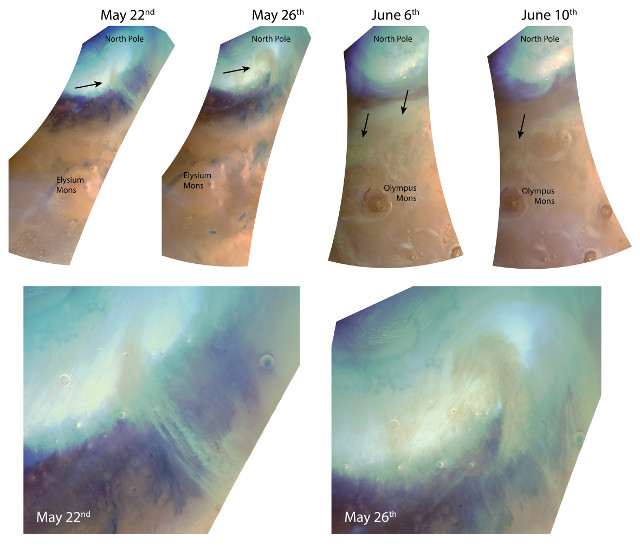 ESA has published images of dust storms sighted at the edge of the northern polar cap of the planet Mars between May 22 and June 10, 2019. The Mars Express space probe’s High Resolution Stereo Camera (HRSC) and Visual Monitoring Camera (VMC) instruments allowed to observe at least eight different storms that formed and dissipated very quickly for a duration between one and three days each during which they moved to the equator and the ancient volcanoes Olympus Mons and Elysium Mons. Those are short-lived local phenomena, small compared to the global storm that covered the entire planet last year, but help to understand the processes taking place in the Martian atmosphere.

In this period it’s spring in Mars’ northern hemisphere and this means that the space probes orbiting the planet often observe clouds of water ice and dust that rises from the surface at the edges of the polar ice cap that gets reduced with the rise of surface temperature. There may be conditions in which global storms develop but normally these are small local storms and at least eight of this type were observed in recent weeks.

The observed local storms have a spiral shape due to the deviation of air masses caused by the planet’s rotation. It’s a phenomenon known as the Coriolis force also observed on Earth, where cyclones have a spiral shape that is clockwise in the northern hemisphere. Storms on Mars are generally weaker than the Earth’s due to the much lower atmospheric pressure, less than 1% on the surface, and to the speed of the Martian winds less than half of that typical of winds in Earth’s hurricanes.

The long top images (ESA/DLR/FU Berlin, CC BY-SA 3.0 IGO) captured by the HRSC instrument show some of the storms that cover areas of around 2,000 by 5,000 kilometers extending from the north pole to the equator and the big Olympus Mons and Elysium Mons volcanoes. The storms of May 22 and 26 are shown in the long images but also in the smaller panels. A third one is shown in the development that took place between June 6 and 10. The bottom image (ESA/GCP/UPV/EHU Bilbao) captured by the VMC instrument shows the sand storm in progress on May 29, 2019, which began on May 28 and ended on June 1.

The duration of these local dust storms is limited to no more than a few days because the dust that is raised is transported and dispersed by global circulation phenomena ending up becoming a thin haze in the lower atmosphere, at altitudes between 20 and 40 kilometers. Some traces of dust and clouds from the observed storms remained in the areas of the volcanoes until mid-June. 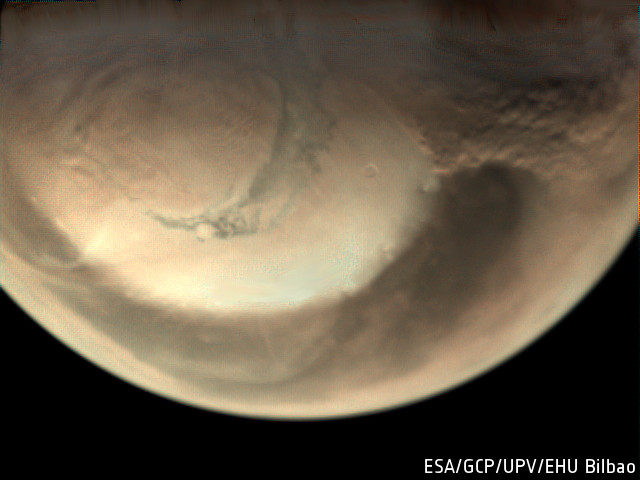