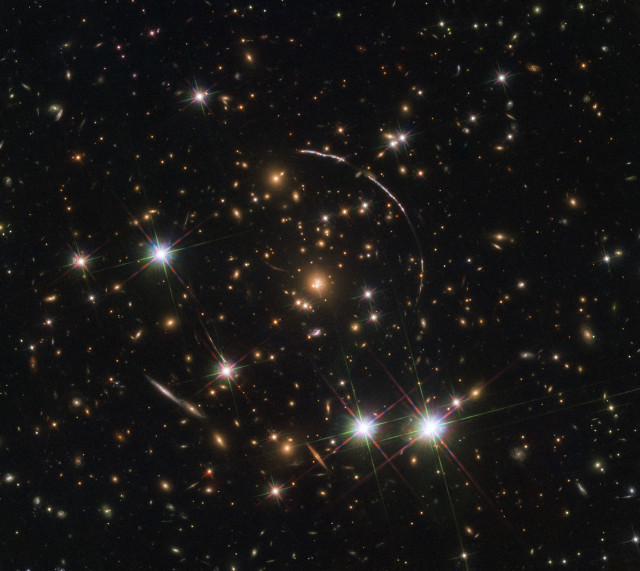 An article (link to PDF file) published in the journal “Science” reports a study of a galaxy nicknamed Sunburst Arc observed through a gravitational lensing effect that leads to multiplying its image obtaining at least 12 distorted copies in four large arcs. The Hubble Space Telescope detected the light from that galaxy, about 11 billion light years from Earth, thanks to that effect, which also made it between 10 and 30 times brighter. Studying such an ancient galaxy allows to gather information on the early universe and on what’s called the epoch of reionization.

Sunburst Arc is the nickname given to the galaxy officially cataloged as PSZ1 G311.6602-18.4624. Between it and the Earth, about 4.6 billion light years from Earth, there’s a galaxy cluster whose overall gravity is so powerful as to distort the light of the Sunburst Arc. This is the gravitational lensing effect predicted by Albert Einstein’s theory of General Relativity, confirmed in 1979 and since then increasingly used by astronomers using instruments with a growing power that can take advantage of it.

In the Sunburst Arc’s case, its light was distorted in such a way that Hubble detected at least 12 copies in four large arcs: in the image (ESA/Hubble, NASA, Rivera-Thorsen et al.) three of them are visible in the top right while the fourth arc is in the lower left, in part obscured by the light of a star that is in the foreground because it’s inside the Milky Way.

The magnification of the Sunburst Arc images is distorted but the processing of those images captured by the Hubble Space Telescope’s Wide Field Camera 3 (WFC3) and Advanced Camera for Surveys (ACS) instruments revealed details with a size of 520 light years. For an object about 11 billion light years from Earth, that’s an extraordinary resolution, unthinkable without the gravitational lensing effect.

The result shows that the Sunburst Arc is similar to galaxies that existed earlier, perhaps even just 150 million years after the Big Bang. The details show the traces of a process that was proposed as a theory and only now was observed, in which high-energy photons escape the galaxy through narrow channels in an intergalactic medium rich in neutral gas.

Probably the process observed isn’t the main one that led to the reionization in the epoch in which hydrogen, which in the first period of life of the universe was neutral, was split into protons and electrons. It was a crucial moment because neutral hydrogen blocked light, therefore reionization transformed the universe from a dark place to one illuminated by the light of the early stars. Various researches indicate other possible causes suggesting that it wasn’t just one that caused that reionization.

Precisely because it’s not yet clear what happened at a crucial moment like the epoch of reionization, the possibility of studying a very ancient galaxy like the Sunburst Arc is very useful. In the coming years astronomers hope to get new answers from next-generation instruments such as the James Webb space telescope to understand how the universe has become what we see today.

Previous Post: A study of 20 radio galaxies offers new information on the activity of the supermassive black holes at their center
Next Post: A success and new records with the second launch of 60 Starlink satellites by SpaceX