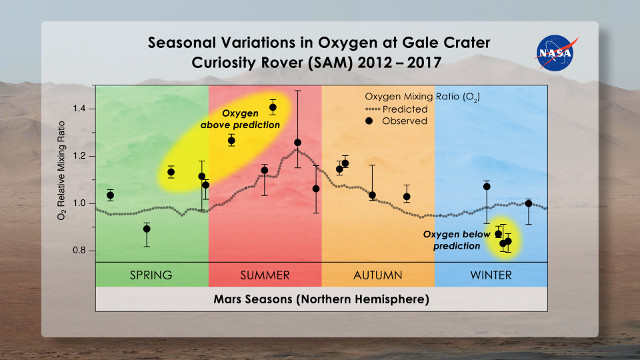 An article published in the “Journal of Geophysical Research: Planets” reports an analysis of the composition of the atmosphere of the planet Mars based on data collected by NASA’s Mars Rover Curiosity. A team of researchers led by Melissa Trainer of NASA’s Goddard Space Center confirmed the presence of various gases already known with seasonal variations due to carbon dioxide’s freezing and evaporation. A surprise came from the detection of a remarkable growth of oxygen in spring and its drop back to the previous levels in fall. This is a new mystery added to that of the presence of methane on the red planet.

The Quadrupole Mass Spectrometer, one of the instruments of the Mars Rover Curiosity’s portable chemistry lab called Sample Analysis at Mars (SAM), periodically analyzed the air in Gale Crater on Mars for about three Martian years, about six Earth years. This allowed to obtain the average percentages of the composition of the Martian atmosphere: 95% is composed of carbon dioxide, 2.6% of molecular nitrogen, 1.9% of argon, 0.16% of molecular oxygen and 0.06% of carbon monoxide.

The researchers found a predictable seasonal pattern for nitrogen and argon linked to variations in carbon dioxide. The surprise came from oxygen, which increased in spring and summer by up to 30% and then returned to previous levels in fall. The increase was different for every Martian year but the pattern was repeated, suggesting that some process generated oxygen and then removed it. The pattern is shown in the top image (Courtesy Melissa Trainer/Dan Gallagher/NASA Goddard).

Various possibilities were considered to explain that anomalous variability in the oxygen present in Mars’ atmosphere but the researchers ruled out instrumental problems and processes such as the generation of oxygen from molecules of water and carbon dioxide broken by solar radiation.

The oxygen variability was similar to methane’s, another mystery for the scientists who are studying Mars. The patterns for the two gases are shown in the bottom image (Courtesy Melissa Trainer/Dan Gallagher/NASA Goddard). There could be a correlation between the two gases but it’s all to be discovered.

Scientists have long been examining the various possibilities regarding methane production and now started investigating oxygen’s production as well. Both can be produced by biological and abiological processes, which complicates the investigation. The possibility that life forms on Mars produce these gases is very intriguing but there’s no evidence of their presence so scientists are very cautious and are examining possible abiological processes as a more likely explanation. 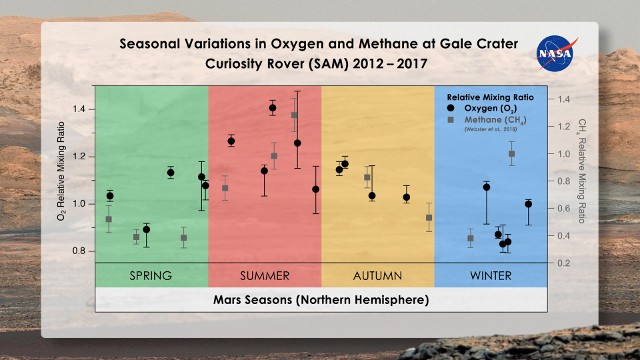 Previous Post: A success and new records with the second launch of 60 Starlink satellites by SpaceX
Next Post: The Hayabusa 2 space probe has departed from asteroid Ryugu