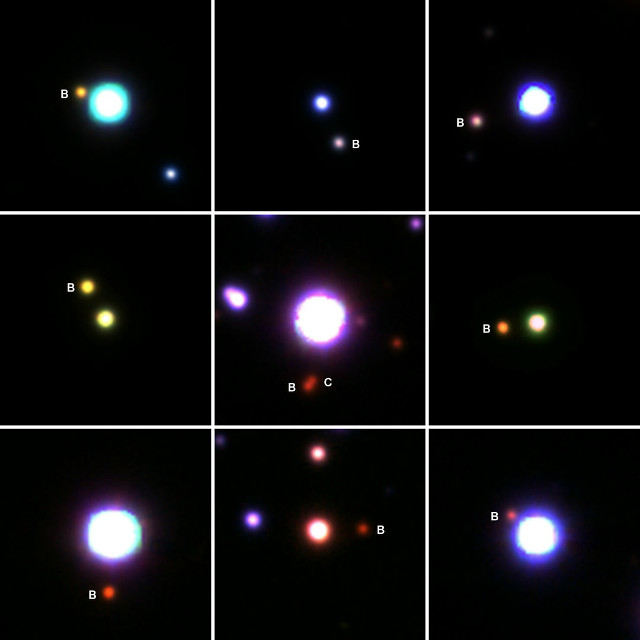 An article published in the journal “Monthly Notices of the Royal Astronomical Society” reports an analysis of data collected by ESA’s Gaia space probe in search for exoplanets in multiple systems. Dr. Markus Mugrauer of the University of Jena, Germany, examined over 1,300 stars hosting exoplanets in a radius of about 1,600 light years from Earth to determine which of them had one or even more companions. The result is that over 200 of them are multiple systems, in one case even a quadruple one, in which the companions are above all red dwarfs but in eight cases there’s a white dwarf as a companion. This is the confirmation that multiple systems with exoplanets are not an exception and that exoplanets can survive the death of one of the stars.

Data Release 2 (DR2) was published by ESA on April 25, 2018, a catalog created thanks to the work of the Gaia space probe, which is mapping the sky and in particular the objects in the Milky Way with great precision. The availability of large amounts of data on many stars and their planets offers new possibilities for studies, in this case on exoplanets in multiple systems.

In little more than twenty years of discoveries on exoplanets, several have already been found in binary systems and in some cases even in systems with more than two stars. They have been nicknamed Tatooine, like Luke Skywalker’s planet in the Star Wars saga. Multiple systems are very common but it’s still unclear under what conditions they can ensure configurations stable enough for planet formation and Dr. Markus Mugrauer tried to conduct an examination on many systems to try to understand it and find the differences from the solar system.

The most accurate data are those about our “neighborhood” so Dr. Markus Mugrauer considered the more than 1,300 systems distant up to 1,600 light-years from Earth. In this area, there are over 1,300 systems and the Gaia space probe data revealed that 176 are binary systems, 27 triple systems and one is a quadruple system. In these systems, the stars are separated by distances between 20 and 9,100 times the Earth’s from the Sun concentrated within 1,000 times that distance. The image (Courtesy Mugrauer, PanSTARRS) shows some of the systems examined in which the stars hosting exoplanets have one or two companions, indicated with the letters B and C in photos taken by the Panoramic Survey Telescope and Rapid Response System (PanSTARRS).

Red dwarfs are the most common class of stars so it’s not surprising that they’re also the most common companions for stars hosting planets. The mass of those companions indicates that there are also other classes because it’s between 0.078 and 1.4 times the Sun’s but the distribution peak is between 0.15 and 0.3 times the Sun’s, which means that there’s a peak of red dwarfs. The interesting thing is that 8 of these companions are white dwarfs, the objects that represent the final phase of the life of a small or medium mass star. Those stars pass through an agony in their red giant phase in which they eject their outer layers so the fact that exoplanets can survive that event is significant.

The statistics of this research indicate that around 15% of the examined stars hosting exoplanets have at least a companion, about half of what predicted for that class of stars. Another significant fact is that in multiple star systems the distances between the stars that compose them are five times greater than ordinary systems. The most likely explanation is that the presence of nearby stars interferes with planet formation and the subsequent development of their orbits. In essence there could be a gravitational influence on the protoplanetary disk right from star formation and then on the planets that formed.

Markus Mugrauer mentioned another observation campaign in progress at ESO’s Paranal Observatory in Chile to collect more data that will be useful to continue the investigation. The Gaia space probe also continues its mission by adding more data to those collected in recent years and future ESA data releases will provide further contributions to astronomical research. The themes of planetary formation and the evolution of star systems are among the most fascinating for the comparison with the solar system and for the search for potentially habitable exoplanets.