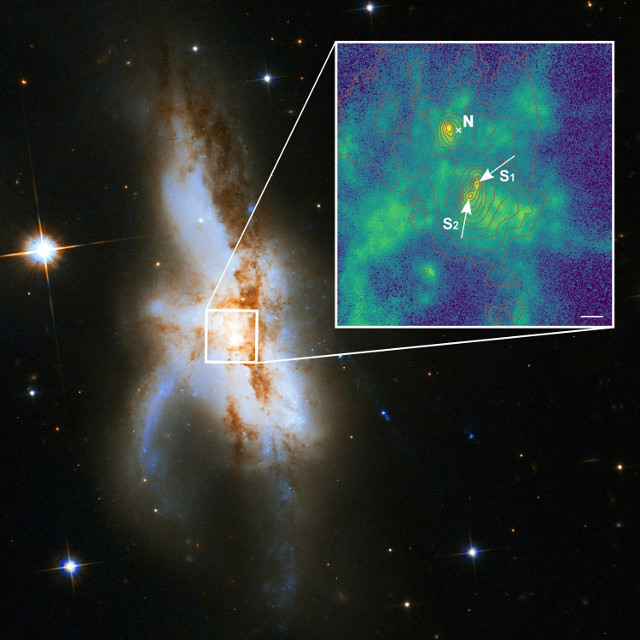 An article published in the journal “Astronomy & Astrophysics” reports a study on the galaxy NGC 6240 with evidence that it contains three supermassive black holes. A team of researchers led by Professor Wolfram Kollatschny of the University of Göttingen used the MUSE instrument mounted on ESO’s VLT in Chile together with data from previous studies to obtain the high-precision observations needed to verify that within NGC 6240 there were not two supermassive black holes as it seemed from previous studies but three. This indicates that the current merger is involving three galaxies.

Approximately 400 million light years from Earth, the galaxy NGC 6240 is a case of galaxy merger still in progress. For this reason, it was already the subject of past studies, also focused on the supermassive black holes it hosts, such as the one reported in an article published in the journal “Nature” in April 2018. However, those studies indicated that the merger was between two galaxies, each hosting a supermassive black hole. Now, however, new observations show a more complex situation.

What were interpreted as two active galaxy nuclei were identified thanks to observations conducted with the MERLIN (Multi-Element Radio Linked Interferometer Network) and VLBA (Very Long Baseline Array) radio telescopes at radio frequencies and with the Chandra X-ray Space Observatory. In this new study the researchers used the MUSE (Multi Unit Spectroscopic Explorer) instrument on the VLT (Very Large Telescope), which is equipped with a very sophisticated adaptive optics that enables high resolution observations with a sharpness comparable to the Hubble Space Telescope’s. In addition, these observations contain spectral detections that allowed to determine the motion and masses of the supermassive black holes within the galaxy NGC 6240.

The image (P Weilbacher (AIP), NASA, ESA, the Hubble Heritage (STScI/AURA)-ESA/Hubble Collaboration, and A Evans (University of Virginia, Charlottesville/NRAO/Stony Brook University)) shows the galaxy NGC 6240 and in the inset a zoom of the area that contains the supermassive black holes. The north black hole (N) is active and was already known while what was considered the south black hole now appears to be a pair (S1 and S2). The green color indicates the distribution of the ionized gas from the radiation surrounding the black holes. The red lines show the contours of the starlight from the galaxy and the length of the white bar corresponds to 1,000 light years.

Understanding that the merger of three galaxies is underway in NGC 6240 is fundamental to understand the evolution of galaxies over time, in particular to explain the formation of the most massive galaxies. That’s because a simultaneous merger of more than two galaxies allows a much faster evolution of the one that will exist at the end of that process compared to a series of successive mergers.

In the galaxy NGC 6240, the processes related to the merger will lead, probably in a few million years from our point of view on the Earth, the supermassive black holes to merge as well, generating very strong gravitational waves. ESA’s LISA (Laser Interferometer Space Antenna) mission has a constellation of three satellites scheduled to be launched in 2034 to detect those gravitational waves in space. We can expect a lot of progress in gravitational waves astronomy over the next decades with increasingly sophisticated ground-based and above all space detectors, as in space there are no sources of vibrations that disturb its task.

Multimessenger astronomy, in cases such as galaxy mergers based on the combination of electromagnetic waves and gravitational waves detections, could help to better understand the processes in place and the influence of a merger on the evolution of the resulting galaxy. In the case of the galaxy NGC 6240 the timescale is still very long for the human scale but astronomers are finding more and more supermassive black hole pairs so it’s possible that their merger can be observed in the near future.

Previous Post: The center of the Milky Way seen in detail by the MWA radio telescope
Next Post: NASA presented a lander concept and a rover project for its Artemis program