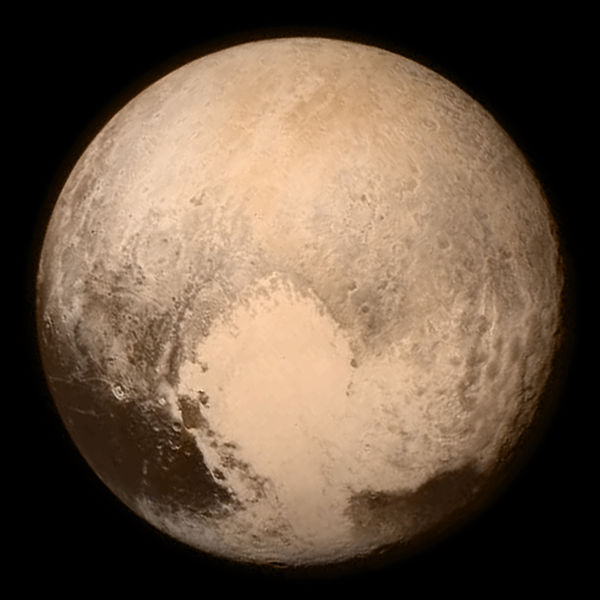 An article published in the “Journal of Geophysical Research” reports a study on the dwarf planet Pluto and in particular on the heart-shaped region called Tombaugh Regio and its influence on global atmospheric circulation. A team of researchers coordinated by NASA’s Ames Research Center used data collected by the New Horizons space probe to specifically study nitrogen circulation and its cycle appropriately compared to a heart beat. This is another confirmation that Pluto is an active small world despite its small size and thin atmosphere.

The Pluto flyby performed by the New Horizons space probe on July 14, 2015 has radically changed our knowledge of this dwarf planet. Before New Horizons got close enough to photograph its surface and to detect the processes taking place on it, we had limited information about Pluto. Even the most powerful instruments were barely able to show that its surface wasn’t uniform but something more than a ball covered in ice of nitrogen, of other molecules that are gaseous on Earth and even of water ice.

The photos taken on that flyby showed a truly extraordinary little world with varied geological features, among which a giant heart stood out. The New Horizons mission team started giving names to the various geographical elements of Pluto and the heart was named Tombaugh Regio after Clyde Tombaugh, who discovered Pluto on February 18, 1930. In 2017 it was among the names officially approved by the International Astronomical Union (IAU). The image (NASA/JHUAPL/SWRI) shows Pluto with Tombaugh Regio in the foreground in a combination of photos taken with the New Horizons space probe’s LORRI and Ralph instruments.

Tombaugh Regio proved to be an important area not only from an aesthetic point of view but also for Pluto’s evolution. In November 2016, two articles published in the journal “Nature” indicated its influence on the reorientation of the dwarf planet’s axes. Now this new research indicates that that big heart is at the center of a global nitrogen cycle.

According to the researchers, during the day the Sun’s heat, however weak, is sufficient to sublimate a thin layer of nitrogen ice that freeze again during the night. Most of the nitrogen ice on Pluto is present in Tombaugh Regio so its cycle literally has that area as its heart. Its importance in the nitrogen cycle was already shown in previous studies, in this case, however, the researchers showed that it’s sufficient to make it an engine of the winds that circulate throughout the dwarf planet’s surface.

The researchers conducted simulations of the nitrogen cycle to try to obtain a weather model that explained the circulation of winds on Pluto’s surface. According to the results, for most of the year the winds above 4 kilometers blow westward in what is technically called retro-rotation, which means that they blow in a direction that’s opposite to the dwarf planet’s rotation. When the nitrogen inside Tombaugh Regio becomes vapor in the north and ice in the south, its movement generates winds towards the west. Throughout the solar system, perhaps only on Triton, one of Neptune’s moons, there’s an atmosphere with those characteristics. Instead, in some cases such as the strong winds on the western borders of the Sputnik Planitia basin, Tombaugh Regio’s left lobe, the air flows are similar to the patterns of certain winds on Earth.

This new model offers an explanation for some geological features around Tombaugh Regio. Relatively warm winds can heat the surface or they can erode and make the ice darker by transporting and depositing particles of the hazes existing in the atmosphere. If those winds blew in a different direction, the landscape could have a very different look.

Despite the very low temperatures, there’s activity on Pluto’s surface, even greater than what was discovered in studies of recent years. The influence of Tombaugh Regio was compared to that of the Earth’s oceans, showing that certain weather patterns can have similarities even in very different conditions.

Previous Post: The return of three astronauts from the International Space Station marks the end of Expedition 61
Next Post: The Solar Orbiter space probe has been successfully launched to study the Sun and its poles