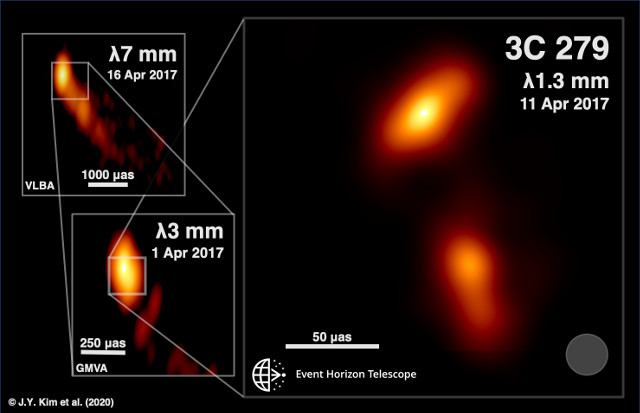 An article published in the journal “Astronomy & Astrophysics” reports the creation of images of the blazar 3C 279 by the Event Horizon Telescope (EHT) Collaboration. One year after the presentation of the photo of the area around the supermassive black hole at the center of the galaxy Virgo A, also known as M87, the international collaboration that used a series of radio telescopes to obtain the most detailed astronomical image of the history of an object millions of light years away offers the results of another observation campaign. Again, an object of that type was at the center of the attention, but 3C 279 is about a hundred times farther away than Virgo A. Despite this, EHT captured the sharpest details ever obtained of a relativistic jet produced by a supermassive black hole, of which it was also possible to trace the origin.

About 5 billion light years away from Earth, 3C 279 is a blazar, which is a quasar that has a jet oriented towards the Earth. That jet, and the second on the other side of the quasar, is generated by the activity of a supermassive black hole surrounded by a huge amount of materials. Quasars are the brightest objects in the universe because the materials that approach the black hole get heated to the point of emitting very strong electromagnetic radiation in many bands. This makes quasars visible also by radio telescopes and interesting targets for the EHT Collaboration.

In the 2017 observation campaign, one of the targets of the observations of the EHT Collaboration was the blazar 3C 279. The supermassive black hole that powers it has an estimated mass around one billion times the Sun’s, about one sixth of the one at the center of the galaxy Virgo A, but still of considerable mass even for this type of object. The possibility of synchronizing the observations of various radio telescopes made it possible to obtain details never seen before, compared to the possibility of identifying an orange on the Moon in an observation made from the Earth. In the case of 3C 279, it means that the resolution is finer than a light year.

The image (Courtesy J.Y. Kim (MPIfR), Boston University Blazar Program (VLBA and GMVA), and Event Horizon Telescope Collaboration) shows the structure of the jet of the blazar 3C 279 at various wavelengths in April 2017.

The blazar 3C 279 was already studied in recent years, but the result of the EHT Collaboration made it possible to obtain details of the relativistic jet aimed towards the Earth to the point of being able to follow it up to the accretion disk that surrounds the supermassive black hole. This allowed to discover that the jet’s shape is twisted at the base while it’s normally straight and structures perpendicular to the jet that could be the pole of the accretion disk from which the jet is ejected.

The observations continued for several days and a comparison between images indicates that the observed structures change in minimal detail. This could be caused by the rotation of the accretion disk and the materials’ shredding and infall. These are phenomena that astronomers expected thanks to numerical simulations, but so far it wasn’t possible to observe them directly. In short, there was a confirmation of theoretical models, and that’s an important result as well. Kazi Rygl of the Italian National Institute of Astrophysics in Bologna, part of the ETH team, stated that this new study allows to better understand the physical processes and structure of jets in active galactic nuclei.

Jae-Young Kim, who directed the data analysis of the blazar 3C 279’s data, is enthusiastic about the results, but at the same time expressed some perplexity in the discovery of the perpendicular structure. He also spoke of the movements of the relativistic jets that seem faster than light, but that’s due to an optical illusion.

The processing of the amount of data collected by the EHT Collaboration is long, but the results are truly extraordinary. Other results will be published in the future, and for the moment it’s the only job for the scientists working on the observation campaigns because the one scheduled for March / April 2020 was canceled due to the Covid-19 pandemic. The job will be resumed as soon as possible with the new campaigns.

Previous Post: The arrival of three new astronauts on the International Space Station completes the Expedition 62 crew
Next Post: Superfast winds detected in the atmosphere of a brown dwarf