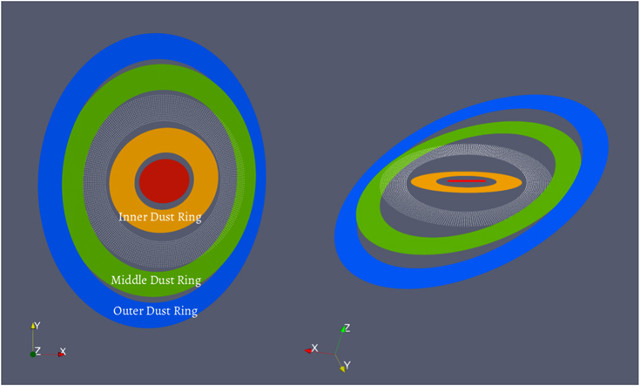 An article published in “The Astrophysical Journal Letters” reports a study of the triple system of GW Orionis, or simply GW Ori, and in particular of the interactions between the three stars that compose it and the disk of gas and dust that surrounds it, divided in three rings. A team of researchers coordinated by the Department of Physics & Astronomy of the University of Victoria, Canada, used the ALMA radio telescope to conduct the observations necessary to identify the three rings, to estimate their masses, and to discover a misalignment between them.

Just over 1,300 light-years from Earth, the GW Ori system has been known for a long town, so much so that it also has other designations depending on the catalog, but it took many years to understand its composition. It was initially mistaken for a system consisting of a single star in its formation stage that has yet to enter the main sequence in which it will spend most of its life. An article published in June 1991 in “The Astronomical Journal” revealed the presence of a second star in the system and an article published in May 2011 in the journal “Astronomy and Astrophysics” revealed the presence of a third star.

These three very young stars are gravitationally bound with GW Ori A and GW Ori B separated by a distance close to that between the Earth and the Sun and GW Ori C orbiting its two companions at a distance from them that is about 8 times that between the Earth and the Sun. Another important factor in this triple system is the really huge disk of dust and gas since it extends up to a distance that is 1,300 times that of the Earth from the Sun. Previous observations led to generate models that predicted a gap in the disk that split it into two parts. The new observations made with the ALMA radio telescope (Atacama Large Millimeter/submillimeter Array), inaugurated in March 2013, made it possible to obtain more precise results.

According to the authors of this new research, the circumtriple disk of GW Orionis is split into three parts that form three concentric rings. They are at 46, 88, and 338 times the distance of the Earth from the Sun from the center of the disk respectively. The existence of the inner ring isn’t a complete surprise because some models predicted its existence, but observations brought evidence. The structure of the disk is rare, also because the rings are misaligned with angles of 11, 35, and 40 degrees with respect to the plane of the orbit of GW Ori A and B. The estimated masses of the three rings are 74, 168, and 245 times that of Earth respectively.

The image (Courtesy Jiaqing Bi et al 2020 ApJL 895 L18) illustrates the structure of the circumtriple disk highlighting the three rings with different colors with a view with respect to the plane of the orbit of GW Ori A and B that shows their misalignment.

The researchers conducted a series of computer simulations to try to understand the origins of the misalignment of the disk rings. According to the results, the presence of the three stars could be one of the causes, but there could be the influence of other objects.

The GW Orionis system is a really interesting object of study for everything it continues to reveal. The observations could offer new information on the evolution of multiple systems to understand, for example, if the disk could become a protoplanetary disk in which planets could form despite the different gravitational influences.

Previous Post: Two protostars in their first phase of formation identified in the Ophiuchus molecular cloud
Next Post: The youngest known pulsar is also a magnetar