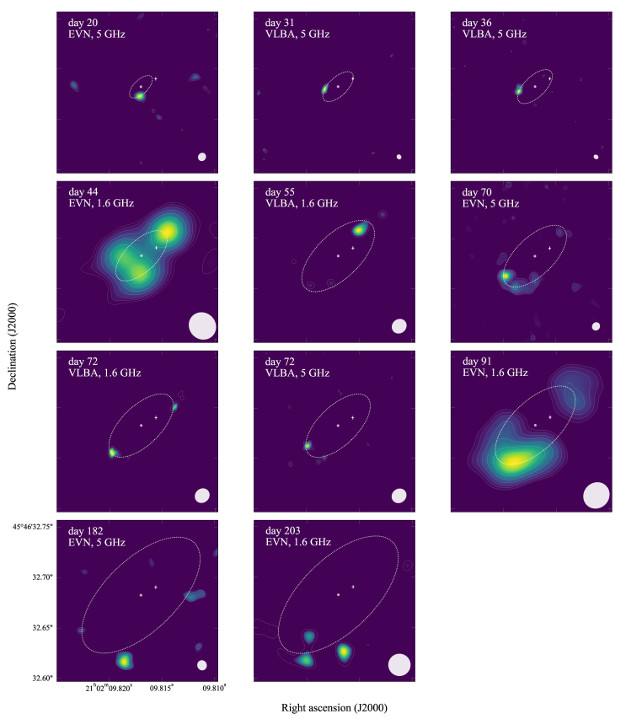 An article published in the journal “Astronomy & Astrophysics” reports a study of V407 Cygni, the first known gamma-ray nova, discovered in 2010. A team of researchers led by Marcello Giroletti from the Italian National Institute of Astrophysics used data collected using the European VLBI Network (EVN) over 16 different periods to monitor the radio emissions of what is a symbiotic nova. The result was the discovery of shock waves generated by the explosion of materials accumulated on the white dwarf’s surface that forms a couple with a red giant from which it steals them.

On March 10, 2010, NASA’s Fermi space telescope’s LAT (Large Area Telescope) instrument detected a transient source of gamma rays at the location where the symbiotic nova V407 Cygni was already known. The discovery was reported in an article published in the journal “Science” in August 2010.

That phenomenon aroused surprise because it was the first time that an explosion so energetic as to produce gamma rays was discovered in a symbiotic nova. Pairs of that type are rare, so the observations continued, and not only with instruments capable of detecting very energetic emissions such as X-rays and gamma rays but also radio telescopes.

EVN is a consortium that includes a series of radio telescopes that can operate as if they were a single instrument. In fact, the VLBI in the acronym is in turn the acronym for Very Long Baseline Interferometry, the technique that allows to combine the observations of very distant radio telescopes. That’s the same technique used to obtain the image of the area around the supermassive black hole at the center of the M87 galaxy.

In the case of the nova V407 Cygni, observations with the EVN began 20 days after the event was identified and continued for six months. The image (ESA) shows a sequence of those observations illustrating the evolution of the shock wave. Thanks to the details obtained using those radio telescopes together, it was possible for the first time to detect the presence of the shock wave in such an event. It was also possible to understand the source orientation: the red giant is in the foreground in front of the white dwarf, from which opposite jets depart which are perpendicular to the line of sight.

These observations also allowed to reveal traces of previous events in the life of this binary star observed in the past. One event dates back to 2003, another even to the 1930s. The new information led to a step forward in understanding the evolution of rare objects such as symbiotic novae. These powerful outbursts, luckily very far from Earth, don’t reach supernova levels, but are still very bright. The white dwarf will attract more gas ejected by the red giant, and in the future there will be more such events for which astronomers will be prepared.

Previous Post: A primordial supermassive black hole has a mass that is difficult to explain
Next Post: The mysterious disappearance of a luminous blue variable star in the Kinman dwarf galaxy