An article published in the journal “Astronomy & Astrophysics” reports the detection of extremely energetic gamma-ray emissions from the Eta Carinae system. A team of researchers coordinated by the German national nuclear physics research center DESY used the HESS telescope system to detect those gamma rays and prove that they were generated by the collision of stellar winds from the two blue giant stars that make up this binary system. Various models have been proposed, and a study published in a second article on “Astronomy & Astrophysics” offers some evaluations that follow a reanalysis of data collected over time by various instruments.

About 7,500 light-years away from the Earth, the Eta Carinae system was for some decades the second brightest star in the sky after reaching its peak of brightness in 1843. For that reason, in the 19th century, it became famous but the instruments of that period didn’t enable astronomers to examine the Great Eruption in enough detail to explain its cause. The interest in the two stars that make up the Eta Carinae system, with masses of about 100 and 30 times that of the Sun, has continued.

Giant blue stars like those of the Eta Carinae system (Bottom image (NASA, ESA, N. Smith (University of Arizona, Tucson)) have a furious activity that consumes their hydrogen at very rapid rates. Stars so massive have a life of just a few million years, in the meantime, it’s estimated that the more massive of them lose a mass equal to the Sun’s in just 5,000 years while the less massive one generates a stellar wind that moves away from it at a speed about 11 million km/h, close to 1% of the speed of light.

The two stars’ stellar winds collide in an area where a shock front is formed that heats those materials to temperatures typical of stellar nuclei. At temperatures of 50 million degrees Celsius, materials can emit X-rays, but in an area like that one the subatomic particles are accelerated by powerful electromagnetic fields, and at that point, they can also emit gamma rays.

In 2009, NASA’s Fermi and the Italian Space Agency’s Agile space telescopes detected gamma rays at energies of up to 10 GeV from Eta Carinae. The HESS (High Energy Stereoscopic System) system formed by 4 Cherenkov effect telescopes specialized in the study of very-high-energy gamma rays, between 100 GeV and 100 TeV, detected much more energetic emissions that reach 400 GeV.

The researchers proposed some models that could explain gamma-ray emissions at such high-energy levels. Ruslan Konno, who wrote the second article together with scientists from the Max Planck Institute for Nuclear Physics in Heidelberg, Germany, stated that the analysis of gamma radiation measurements performed by HESS and the satellites shows that the best interpretation is as the product of the rapid acceleration of atomic nuclei. In essence, the interaction of stellar winds could act as a kind of cosmic particle accelerator.

The study of everything that is happening in the Eta Carinae system continues because the activities of the two massive stars are remarkable. Concerning gamma-ray emissions, the Cherenkov Telescope Array (CTA), the next-generation gamma-ray observatory, will enter service in the near future. It will enable to obtain more details on phenomena that generate very high-energy emissions. 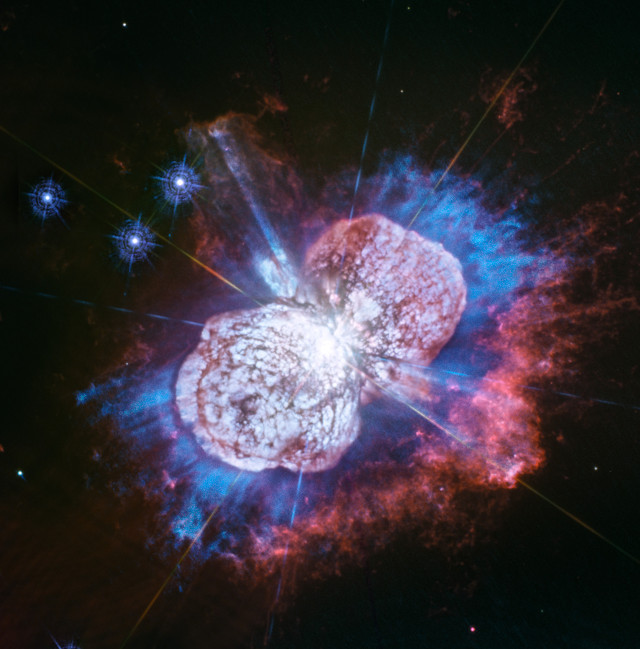