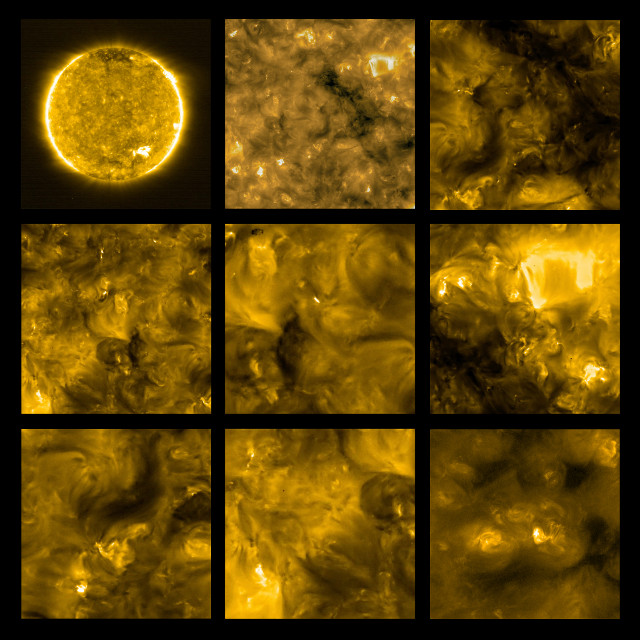 ESA and NASA have published images captured by the Solar Orbiter space probe during its first Sun flyby. In this case, flying by means at a distance of about 77 million kilometers (48 million miles). During that maneuver, all its instruments were active after they were tested and commissioned despite the problems resulting from the Covid-19 pandemic with the difficulties for mission engineers and scientists. Among the first images, there are the ones of the so-called campfires, eruptions that are small by solar standards but are larger than many Earth nations.

Launched on February 10, 2020, the Solar Orbiter space probe is still in the first phase of a long journey that only in 2021 will take it inside the planet Mercury’s orbit to study various characteristics of the Sun. This collaboration between ESA and NASA aims to clarify many still unclear aspects of the Sun’s activity, and in the coming years, there will be a collaboration with NASA’s Parker Solar Probe. This first flyby that put the instruments to the test in a situation that is beginning to be close to the main scientific mission has already made it possible to obtain interesting information.

The eruptions called campfires in jargon are much smaller versions of the gigantic solar eruptions visible even from Earth that are sometimes so powerful that even the remarkable Earth’s magnetosphere can only partially work as a shield. The problem is that we don’t know whether the similarity is also in the mechanisms that generate the campfires or they are fundamentally different phenomena.

A theory connects campfires to one of the most mysterious phenomena of the Sun, the very strong heating of the solar corona, the solar atmosphere’s outermost layer whose temperature exceeds one million degrees Celsius against almost 6,000 degrees of the surface. A single campfire may be irrelevant, but their amount is so great that they could have a significant global effect on the corona.

The Solar Orbiter space probe’s Extreme Ultraviolet Imager (EUI) instrument made it possible to obtain photos of campfires such as the ones in the top image (Solar Orbiter/EUI Team/ESA & NASA; CSL, IAS, MPS, PMOD/WRC, ROB, UCL/MSSL) on May 30, 2020. In the coming years, scientists plan to obtain much closer images to combine with the detections of other instruments to truly understand these phenomena.

Campfires are very interesting and clearly visible in these new photos thanks to their brightness, but the other instruments also provided very satisfactory results. For example, the Polarimetric and Helioseismic Imager (PHI) conducted high-resolution measurements of the magnetic field lines on the Sun’s surface. The Solar Wind Analyzer (SWA) conducted measurements of the ions of various elements present in the solar wind coming from the inned atmosphere. The bottom image (Solar Orbiter (ESA & NASA)) shows indications of the Solar Orbiter’s instruments with photos and measurements from this Sun flyby. ESA has created a gallery with many more images.

These results gave great satisfaction to the Solar Orbiter mission’s staff, also considering the difficulties faced in the instruments’ test phase due to the impossibility in the weeks of the lockdown to meet all together at the mission control center. However, these are absolutely preliminary results. It will take patience but in the coming years, scientists expect much better results. 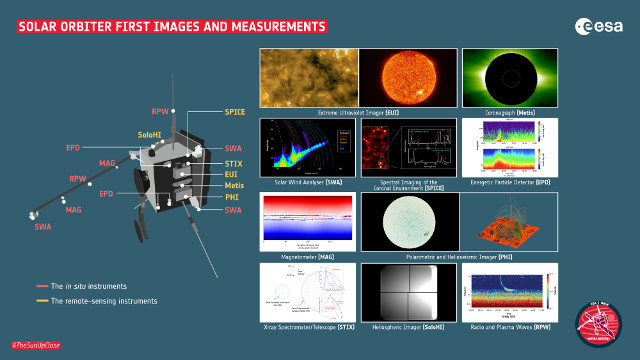