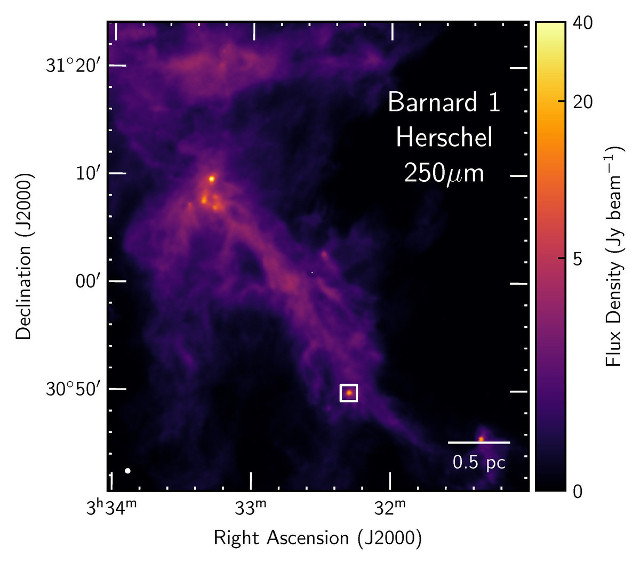 The study of the conditions in which new stars can form in a molecular cloud has been carried out for many years by many scientists thanks to increasingly powerful and sensitive instruments. Observations of stars still in formation can provide a lot of data on those conditions and the processes underway. Per-emb-2 (IRAS 03292+3039) is a system about 1,000 light-years from Earth where two stars are forming together, and in previous observations it showed variability and flickering that made it interesting in the eyes of astronomers. Jaime Pineda’s team, which includes researchers from MPE and the French Institut de Radioastonomie Millimétrique (IRAM), used the NOEMA radio telescope in the French Alps to study it better.

The different molecules detected made it possible to measure the movements of the gas and disk over the streamer from the outer regions of the envelope that surrounds the protostar system to the materials that form the disk. The streamer has a length that is approximately 10,500 times the distance from Earth to the Sun, approximately 1,500 billion kilometers. Positions and gas velocities were reproduced in simulations that match the observations, confirming their correctness.

There’s a sort of reservoir of chemically fresh material that the streamer brings from the outer regions. It could greatly influence the shape and movement of gas in stellar systems. The observations of Per-emb-2 (IRAS 03292+3039) are important to understand this process. The chemical composition of the protoplanetary disk will also be affected by the streamer. Basically, the chances of organic compounds forming will depend on which materials will end up in young systems.

There’s still a lot to understand because the researchers are seeing a moment in a process that can last very long. More observations will be needed, also of other star systems in formation, to understand how long it can go and how it can influence the new planets, also in the possibilities that in the future they might host life forms. 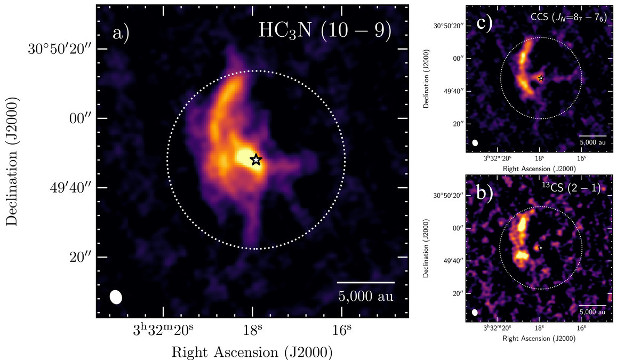 Previous Post: NASA’s Mars 2020 mission has been successfully launched to Mars
Next Post: Mission SpX-DM2 accomplished: the SpaceX Crew Dragon spacecraft has come back to Earth