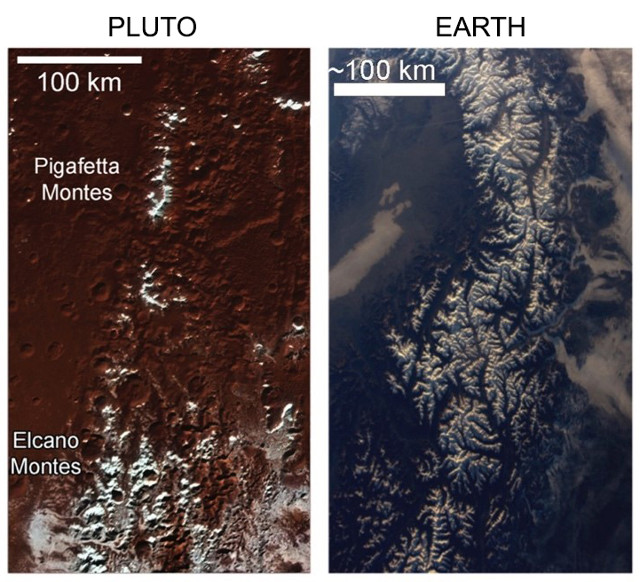 An article published in the journal “Nature Communications” reports a study that offers an explanation for the origin of the snowpack existing on the highest mountains of the dwarf planet Pluto that create a sort of alpine panorama since it resembles in many ways the Earth’s Alps. A team of researchers used data collected by NASA’s New Horizons space probe to figure out that the snow is mainly composed of methane. This compound can become solid under the conditions present on Pluto and forms that mantle through a process that’s very different from that one that leads to alpine snowfall.

The extraordinary Pluto flyby carried out by the New Horizons space probe on July 14, 2015, led to the discovery of a wonderful little world where various processes are taking place that generated panoramas that sometimes have a curious resemblance to ones existing on the Earth. One of the cases is that of the mountains existing at the equator of this dwarf planet, in the region called Cthulhu, covered by what looks like a snowpack that makes them similar to the Alps. This discovery aroused curiosity, also because on Earth the temperature of the air decreases with altitude while on Pluto the opposite occurs due to greater solar radiation.

The wealth of data collected by the New Horizons space probe has already made it possible to obtain many answers regarding the processes taking place on Pluto, and is available to anyone who wants to conduct other research. In the past, the Laboratoire de Météorologie Dynamique (LMD) had already created the Pluto Global Climate Model (GCM) to study the climate on this dwarf planet. In this case, the researchers used the available data to study the processes that lead to the formation of what looks like a snowpack on its mountains.

The results obtained by the researchers point to the presence of methane on Pluto. Even under the conditions existing on Pluto, methane can be in a gaseous state in the atmosphere, but the circulation of winds tends to carry it upwards. On the peaks of the highest mountains, its concentration is sufficient to make it condense to form frozen fragments. According to the researchers, the ice cap reflects the dim sunlight making the area even colder and further aiding the sublimation of methane from gas to ice.

The result is a landscape like the one shown in the image (NASA/Johns Hopkins University Applied Physics Laboratory/Southwest Research Institute / Thomas Pesquet/ESA) of Pigafetta Montes and Elcano Montes on Pluto, similar to that of the Alps seen via satellite near it. Formations of that type have also been seen in other areas of Pluto and may have been created by the same process along with steep ridges.

Tanguy Bertrand, lead author of this study, pointed out that Pluto is one of the best natural laboratories we have for exploring physical and dynamic processes taking place when there’s a transition between the solid and gaseous states of compounds in the interaction with a planetary surface. To find traces of processes such as the one that creates mountains similar to those of Earth, it takes a space probe that makes measurements from the vicinity.

Previous Post: The arrival of three new astronauts on the International Space Station completes the Expedition 63 crew
Next Post: Betelgeuse is smaller and closer to Earth than expected