An article (link to the file in PDF format) published in the journal “Nature Astronomy” reports a study on a massive galaxy in the distant universe in which a galaxy merger appears to have inhibited star formation. A team of researchers led by Annagrazia Puglisi of Durham University’s Center for Extragalaxy Astronomy used the ALMA radio telescope to examine the galaxy cataloged as ID2299 and found star formation activity in its central regions while a huge amount of gas was ejected removing the possibility of forming new stars.

About nine billion years ago a galaxy merger event generated ID2299. Mergers between galaxies are very common, but the consequences can be different. The stars existing in the merging galaxies may not be affected because the space that separates them is huge, but the gas and dust clouds inside them can undergo strong transformations due to the gravitational interactions that are far out of the ordinary.

An article recently published in the journal “Monthly Notices of the Royal Astronomical Society” reports a research on the star formation rate in galaxy merger systems showing systems in which that event triggered extraordinary star formation activity but in other cases the effect can be opposite. In the ID2299 galaxy’s case, the Atacama Large Millimeter/submillimeter Array (ALMA) radio telescope, inaugurated in March 2013, made it possible to observe the molecular gas ejected following the merger by tracing the presence of carbon monoxide inside it.

About half of the gas that was present in the galaxy formed as a result of the merger process was ejected, an enormous amount that indicates that that process had strongly negative consequences on star formation. Only in the central part of ID2299 there’s enough gas left to generate new stars, a process that perhaps in this case was favored by the merger.

The researchers ruled out that the gas was ejected from the galaxy ID2299 by the activity of the central supermassive black hole because the gas velocity is too high. Simulations such as the one in the image below (Courtesy Jeremy Fensch et al. All rights reserved) rule out both supermassive black hole activity and intense star formation as a cause of the gas ejection.

The study of galaxy ID2299 can help to understand why certain massive galaxies are dead or nearly so containing mostly ancient stars. The causes have been under study for years, and the possible causes include central supermassive black hole activity or intense star formation because both can push interstellar gas out of a galaxy. This study suggests a third possible cause.

Antonello Calabrò, a researcher at the Italian National Institute of Astrophysics in Rome and one of the authors of the research, explained that destructive phenomena such as the one detected in the galaxy ID2299 concern only 3% of galaxy collisions. Statistically, astronomers expect a rate of about 500 collisions in a volume of one million cubic light-years every billion years. This makes a case like that of ID2299 not so rare.

The researchers intend to use the ALMA radio telescope again to obtain higher-resolution and deeper observations of the galaxy ID2299 to better understand the dynamics of the ejected gas. Studies on the evolution mechanisms of galaxies are becoming increasingly sophisticated, in this case to understand what can lead to the death of a galaxy. 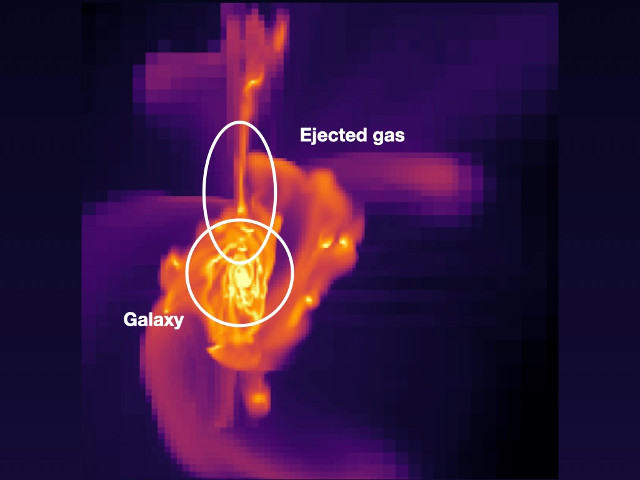 Previous Post: A study on the formation of star clusters following galaxy mergers
Next Post: Mission CRS-21 accomplished: the SpaceX Dragon spacecraft has come back to Earth