An article published in “The Astronomical Journal” reports the study of a nursery of stars in the great molecular cloud cataloged as W49A. A team of astronomers led by Professor Christopher De Pree of Agnes Scott College compared new observations conducted with the VLA (Very Large Array) at infrareds and radio waves of ​​W49A’s central area with observations conducted with the same radio telescope between 1994 and 1995. The result is the identification of new activities with supersonic gas movements in three regions and a high-speed jet in one region.

Approximately 36,000 light-years away from Earth, the molecular cloud cataloged as W49A is a huge area containing various regions filled with molecular hydrogen where the conditions for star formation exist. For this reason, it’s been the subject of observation for decades with increasingly sophisticated instruments, including the VLA radio telescope. Following processes such as star formation takes extremely long times, but a few decades can already show some interesting changes from a scientific point of view.

Professor Christopher De Pree is a veteran of this research, and in 1997 conducted a study on the molecular cloud W49A together with colleagues David Mehringer and William Goss whose results were published in “The Astronomical Journal”. This is a study based on observations conducted with the VLA radio telescope between 1994 and 1995.

De Pree and Goss have now conducted a new study together with other colleagues that includes observations conducted with the VLA between 2015 and 2016. More data was collected in 2015 with another radio telescope, the French NOEMA (Northern Extended Millimeter Array), the most powerful instrument of its kind in the Northern Hemisphere at millimeter wavelengths.

The result of the comparison between observations conducted twenty years apart is the discovery of high-speed jets in one region of the molecular cloud W49A and gas moving at supersonic speeds in three different regions. In one region there was an unexpected reduction in brightness on radio waves. The image below (DePree, et al .; Sophia Dagnello, NRAO/AUI/NSF) shows W49A as seen by the VLA radio telescope with closeups of regions where hydrogen gas is ionized by ultraviolet radiation from young stars.

To get more details on the star formation processes taking place in the W49A molecular cloud and the interactions between the young stars inside it and the rest of the cloud, the astronomers intend to continue their observations. These are really long-term researches, as they concern processes that from a human point of view are extremely slow. 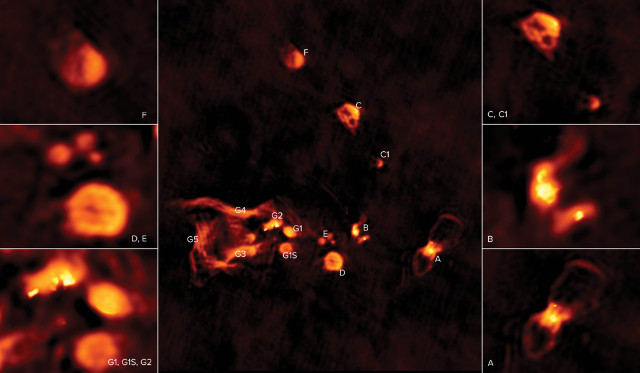 Previous Post: A successful test for SpaceX’s Starship SN15 prototype
Next Post: A study of the strange supernova 2019yvr