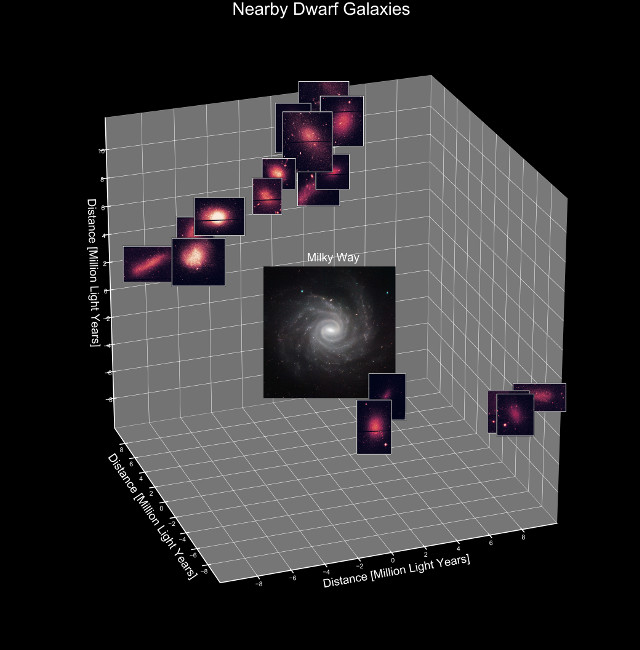 An article published in “The Astrophysical Journal” reports the discovery of 36 dwarf galaxies that are simultaneously showing signs of the start of remarkable star-forming activity. A team of researchers examined a group of dwarf galaxies observed during the ANGST survey noting a simultaneous acceleration in star-forming activity despite the fact that they’re separated even by several million light-years. This is a phenomenon that has no explanation in current models of galaxy evolution.

The ANGST (ACS Nearby Galaxy Survey Treasury) survey is based on photos captured mainly by the Hubble Space Telescope’s ACS instrument and includes 69 relatively nearby galaxies. They include the 36 dwarf galaxies at the center of this new study. Dwarf galaxies are the most common and, as they are the least massive galaxies in the universe, they are also the ones that are most affected by external influences, also in the variations of star formation rate.

Astronomers study star formation in galaxies because this offers information about the environment within them and also in their surroundings, like other galaxies in a galaxy cluster. However, the dwarf galaxies at the center of this study are spread over a large area with distances among them that can be more than 10 million light-years. The image (Courtesy Charlotte Olsen. All rights reserved) shows the distribution of the 36 dwarf galaxies around the Milky Way, which in the image is “played” by NGC 1232, a spiral galaxy with similar characteristics.

Charlotte Olsen of Rutgers University, lead author of this study, explained that these dwarf galaxies appear to be responding to large-scale changes in their environment in the same way that a good economy can lead to a baby boom.

According to the reconstructions, the star formation rate in the 36 dwarf galaxies had a simultaneous decline that began about 6 billion years ago and then grew simultaneously about 3 billion years ago. There are no traces of galaxy mergers that could have triggered new star formation processes, so the researchers think of some phenomenon capable of distributing the gas that allowed that process over enormous distances or a phenomenon so far unknown.

The result of this study must be fully evaluated to understand its consequences. This means, first of all, verifying the data and then studying more dwarf galaxies and more massive galaxies to understand how widespread is the phenomenon. It’s possible that all of this will contribute to improving our knowledge of galaxy evolution and the related theoretical models.

Previous Post: The origin of eight fast radio bursts has been located
Next Post: A study on the origin of ammoniated phyllosilicates discovered on the dwarf planet Ceres