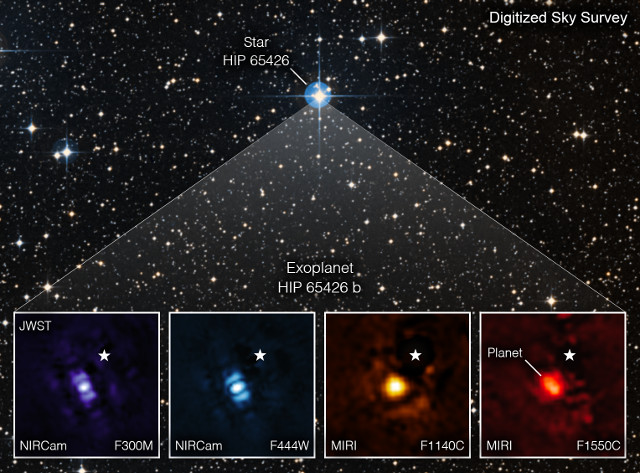 An article submitted for peer-review reports the results of the first direct observation of an exoplanet, a super-Jupiter cataloged as HIP 65426 b, by the James Webb Space Telescope. A large international collaboration led by Sasha Hinkley, associate professor of physics and astronomy at the British University of Exeter, conducted observations of this gas giant as part of Webb’s Early Release Science (ERS) program. There are no revolutionary results but the new space telescope observed new details of an already known exoplanet confirming that it can be a valuable instrument to study exoplanets.

The discovery of the exoplanet HIP 65426 b was announced in 2017 in an article published in the journal “Astronomy and Astrophysics”. The discovery was made thanks to the SPHERE instrument mounted on ESO’s VLT in Chile. This instrument was specifically designed to directly observe exoplanets but, while being the result of an extraordinary design, it’s limited by the fact that the Earth’s atmosphere blocks some of the electromagnetic emissions. The James Webb Space Telescope is in space, so it doesn’t have this problem and can fully exploit its instruments to observe infrared sources.

The Near-Infrared Camera (NIRCam) and Mid-Infrared Instrument (MIRI) instruments are equipped with coronographs to block starlight when observing exoplanets. HIP 65426 b is very far from its star, about a hundred times the distance of the Earth from the Sun but the light of the star would remain a problem because it is over ten thousand times brighter than the planet’s in the near-infrared and a few thousand times brighter in the mid-infrared.

The top image (NASA/ESA/CSA, A Carter (UCSC), the ERS 1386 team, and A. Pagan (STScI)) shows the star HIP 65426 in a Digitalized Sky Survey image and at the bottom, the exoplanet HIP 65426 b seen at different infrared frequencies by the James Webb space telescope’s NIRCam and MIRI instruments. The white star shows the position of the star HIP 65426. The bottom image (ESO) shows HIP 65426 b as seen by SPHERE with the cross showing the star’s position and the circle indicating the orbit of Neptune around the Sun on the same scale.

The views of the exoplanet HIP 65426 b are different due to the different ways in which the instruments of the James Webb space telescope capture the light of the observed object. The bar shapes in the views captured by the NIRCam instrument are artifacts of Webb’s optics.

HIP 65426 b is a young exoplanet in astronomical terms, with an estimated age of 15 to 20 million years. The observations conducted with the SPHERE instrument made it possible to estimate its mass very roughly and its radius between 1 and 1.5 times Jupiter’s depending on the model used. The observations conducted with Webb indicate that its mass is about 7.1 times Jupiter’s with a much smaller approximation while the estimates of the radii remain complex and again provide different results depending on the model used going from 0.92 to 1.45 times Jupiter’s.

At present, the article that reports the analyzes of the observations conducted with the James Webb Space Telescope hasn’t passed the peer review required for publication in a scientific journal. This means that the results still have to be independently reviewed and in any case, miscellaneous corrections and changes can be expected.

Regardless of the findings of this study, Webb continues to offer performances that are even better than promised and that it can provide important information on observed exoplanets. HIP 65426 b is a gas giant that can only be of importance to astronomers but in the case of a super-Earth in the habitable zone of its system, it could provide details on its possible atmosphere, which are valuable to understand if it’s habitable by life forms similar to the Earth’s or even if it’s inhabited. 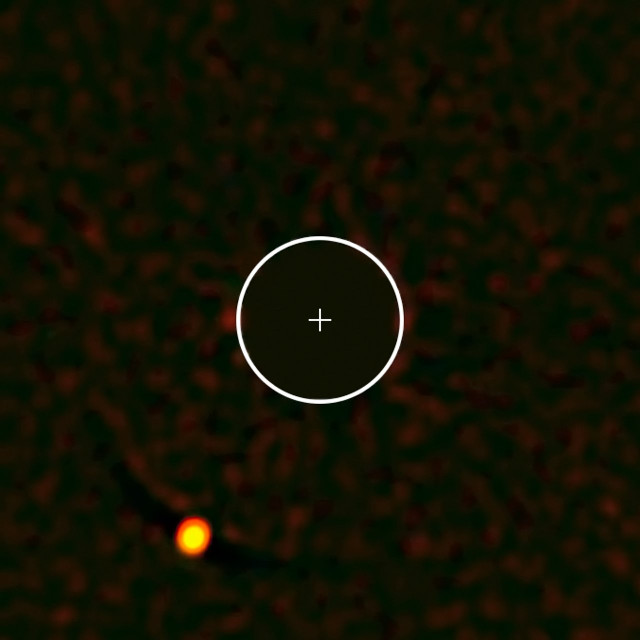 Previous Post: A galaxy merger observed that generated a quenching galaxy with a tidal tail
Next Post: Two thousand years ago Betelgeuse was yellow and not red