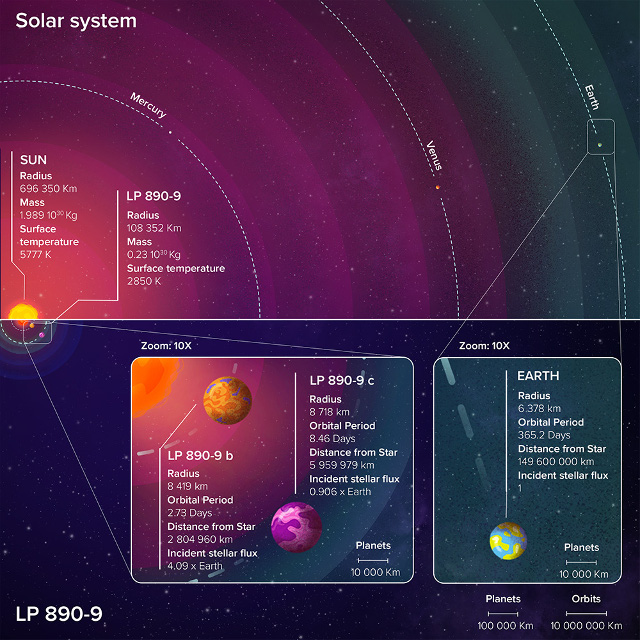 An article published in the journal “Astronomy & Astrophysics” reports the identification of two super-Earths in the system of LP 890-9, a star that is tiny even by red dwarf standards. A team of researchers led by astrophysicist Laetitia Delrez of the Belgian University of Liège examined a candidate identified by the TESS space telescope using the SPECULOOS project Southern Observatory to monitor that system confirming the existence of the exoplanet cataloged LP 890-9b. SPECULOOS found a second exoplanet by observing further transits which was cataloged as LP 890-9c and is in its system’s habitable zone. Only TRAPPIST-1 is a smaller star than LP 890-9 among the ones known to have planets.

About 105 light-years away from Earth, LP 890-9 is a very tiny star, with a mass that is about 12% of the Sun’s and a radius that is about 15% of the Sun’s. In the TESS mission’s observation program that identified the traces of the first exoplanet around it, it’s cataloged as TOI-4306.

The SPECULOOS project Southern Observatory confirmed the existence of the exoplanet LP 890-9b and identified a second exoplanet which was cataloged as LP 890-9c. They’re two super-Earths of similar size, both with a radius that is a little more than 30% greater than the Earth’s. Other instruments were used to gather more information on these two exoplanets.

The image (Courtesy Adeline Deward (RISE-Illustration)) shows a comparison between the LP 890-9 system and the inner solar system with the characteristics of the stars and their rocky planets.

The exoplanet LP 890-9b is very close to its star, so much so that its year lasts only about 2.7 Earth days. Its mass was estimated with a value that can reach a little more than 13 times the Earth’s. Its proximity to its star makes it too hot to be habitable. It could be a super-Venus or its star could have wiped out its atmosphere turning it into a super-Mercury.

The exoplanet LP 890-9c, which was named SPECULOOS-2c by the University of Liège’s researchers, is a little farther away from its star and its year lasts about 8.5 Earth days. This places it within ​​its system’s habitable zone. However, its mass was estimated with a value that can be higher than 25 times the Earth’s.

An exoplanet with the characteristics of LP 890-9c could have a magnetic field that protects it from the emissions from a star that is tiny but could still be very active. The radiation hitting it could still be very strong and interfere with the possible processes that led to the birth of life on Earth. More information is needed to hope to understand if it’s truly habitable, and for this reason, the researchers intend to conduct new observations with instruments suitable for studying this exoplanet’s atmosphere, possibly with the James Webb Space Telescope.

The star LP 890-9 is the smallest among those with known planets after TRAPPIST-1, which became famous after the confirmation that it has 7 rocky planets. The LP 890-9 study confirms that even these ultra-cool dwarfs can have planets, although their habitability potential is yet to be assessed.

Previous Post: Two thousand years ago Betelgeuse was yellow and not red
Next Post: The movement of the stars in the cluster NGC 346 offers clues to star formation in the early universe