New images of the Orion Nebula’s inner region captured by the James Webb Space Telescope show new details of a stellar nursery that has already been studied many over time but continues to reveal new objects every time a new instrument is used to study it. These observations were conducted as part of Webb’s Early Release Science (ERS) program and obtained on September 11, so at the moment, no scientific articles are available on the subject yet but in the future, we can expect an analysis of the collected data and some new discoveries about the processes of star and planet formation.

Launched on December 25, 2021, the James Webb Space Telescope is just beginning to prove its full potential with more detailed and sharper images than any previously obtained of various cosmic objects. Among the targets chosen for the ERS program, there’s the Orion Nebula, part of the Orion Molecular Cloud Complex, or simply Orion Complex, a huge molecular cloud that contains various very interesting star-forming regions.

Massive young stars in the Orion Nebula emit strong ultraviolet radiation into the surrounding molecular cloud. That has various effects on that environment some of which are visible, such as the influence on the cloud’s shape while others are more difficult to detect and understand. Ionized molecules can be detected by color changes but chemical changes are not always as noticeable.

The bottom image (NASA, ESA, CSA, PDRs4All ERS Team; image processing Salomé Fuenmayor) shows some of the interesting objects present in the photographed area. There are various stars such as Theta2 Orionis A, the brightest, to the point of being visible to the naked eye from a place dark enough on Earth.

In addition to the stars and various protostars, there are very diverse filaments in terms of size and shape. The ones in the inset are rich in hydrocarbons and molecular hydrogen from which other stars can be born. Astronomers believe they were created by turbulent movements of the gas within the nebula.

One of the advantages of using the James Webb Space Telescope is its ability to detect more extended infrared frequencies than other telescopes such as Hubble. The dust present in stellar nurseries such as the Orion Nebula blocks many electromagnetic frequencies and the infrared ones are among the few that pass through it.

The Orion Nebula is very bright in infrared and there was doubt that this could pose a problem to the James Webb Space Telescope’s sensitive instruments. The results show that Webb can capture stunning images even in the case of the brightest infrared sources in the cosmos. The Photodissociation Regions for All (PDRs4All) project team, which studies environments such as the Orion Nebula, intends to use Webb to study this and other molecular clouds with massive stars.

The environment present in the Orion Nebula is considered similar to the stellar nursery in which the solar system was formed and this makes it even more interesting. The massive stars inside it were already known because they were visible to other instruments, but Webb can identify smaller, Sun-like stars as well among the dust that could give life to planetary systems. 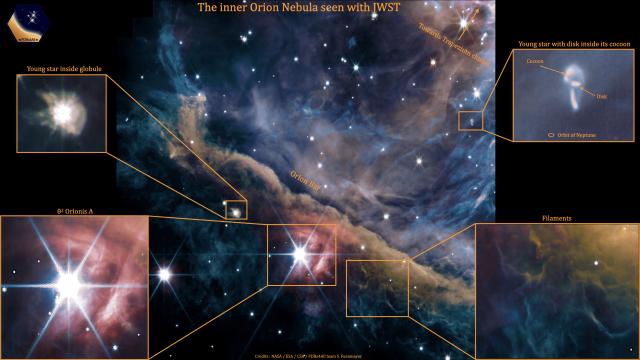 Previous Post: The Solar Orbiter space probe offers a solution to the mystery of the local magnetic field reversal in the solar atmosphere
Next Post: The Mars Rover Perseverance found organic compounds in Jezero Crater on Mars