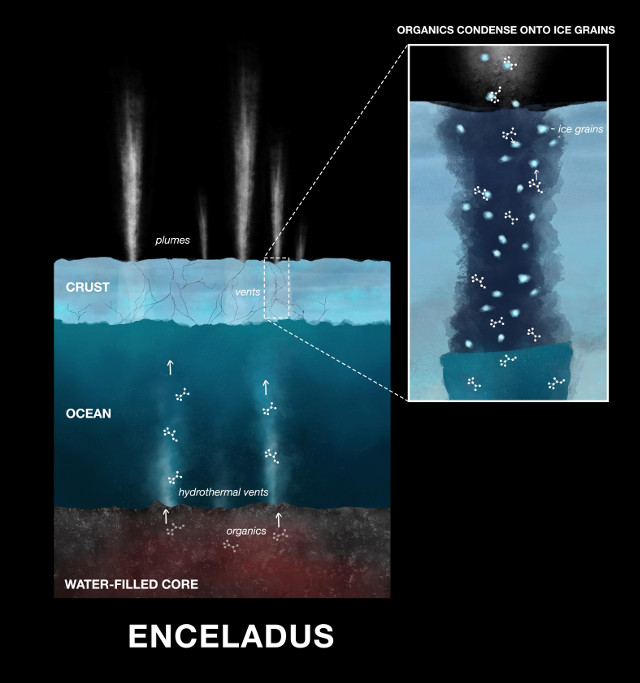 An article published in the journal “Monthly Notices of the Royal Astronomical Society” reports the identification of organic compounds on Enceladus, the moon of Saturn which became famous in the last decade after the discovery of an underground ocean. A team of researchers led by Nozair Khawaja used data collected by the Cassini space probe’s Cosmic Dust Analyzer (CDA) to identify compounds that could be (di)methylamine, ethylamine and carbonyls in ice grains from the surface of Enceladus. They aren’t the first organic compounds that are formed on Enceladus and represent another interesting discovery in the search for life forms on that moon.

The mission of the Cassini space probe ended on September 15, 2017 with the destruction of the space probe in the planet Saturn’s atmosphere, leaving behind a wealth of data collected over the years. Among the big surprises of this mission there was the discovery of the ocean of liquid water under the surface of Enceladus, the moon heated by the deformation caused by the planet Saturn’s gravity. The surface is frozen but there are cracks that allow geysers to spread water full of more or less complex compounds on the outside. Both Cassini mass spectrometers, Ion and Neutral Mass Spectrometer (INMS) and Cosmic Dust Analyzer (CDA), analyzed materials taken from those plumes and from Saturn’s E ring, where a part of them ends up.

Over the years, analyzes of those materials and many other data collected by other instruments of the Cassini space probe allowed to reconstruct what happens in hydrothermal vents similar to those where life on Earth might have emerged. The image (NASA/JPL-Caltech) shows an illustration of one of those vents in which organic compounds are formed that are pushed upwards and, through the cracks in the surface, part of them is ejected outside.

Various organic compounds have already been discovered in Enceladus’ plumes but every new molecule of that type increases the possibility that there are life forms in that underground ocean. This time the molecules identified in the ice grains are (di)methylamine, ethylamine, carbonyl compounds such as acetic acid and acetaldehyde and aromatic compounds.

Some of the compounds discovered are on Earth the building blocks for amino acids. This means that on Enceladus it’s possible that complex molecules and some kind of biological molecules similar to those on Earth got formed. It must be said that we’re still very far from understanding what’s really happening on Enceladus because the analyzes are literally at the surface of this moon. Any new information obtained about the processes taking place in that ocean can enable us to understand something more and so far the news seems favorable to life.

Previous Post: The return of three astronauts from the International Space Station marks the end of Expedition 60
Next Post: Gas filaments discovered that connect the galaxies of a very ancient protocluster